Although inventing can still be a solo endeavor, patenting data indicates that paradigm no longer predominates. Over the past four decades, the number of inventors per patent has steadily crept upward. The first chart below shows the average number of inventors per patent moving from 1.6 for patents issued in the 1970’s to 2.5 for patents issued since 2000.* 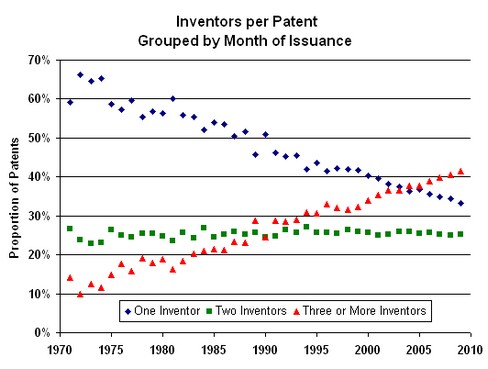 Some areas of technology lend themselves to team work. Biotech research and drug development is typically extremely expensive and done in structured teams while lower-tech areas may not be so structured. Compare, for instance patents in classes 514 (drugs) and 435 (chemistry of molecular biology) with patents in classes 135 (tents) and 297 (chairs). The first group averages three times the number of inventors as the second group.

The rugged individualists are still out there – they are just getting more lonesome.