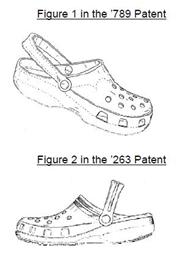 The laws of anticipation and infringement are often considered as a symmetric pair. In its classic statement on point, the Supreme Court proclaimed “[t]hat which infringes, if later, would anticipate, if earlier.” Peters v. Active Mfg. Co., 129 U.S. 530, 537 (1889)

Design Patent Anticipation: If the Egyptian Goddess decision made it easier to prove infringement of a design patent, the rubric of symmetry indicates that the law of anticipation should also change to make it easier to invalidate a design patent. In particular, in this case Walgreens successfully argued that the points-of-novelty test for novelty should be eliminated.

Writing in Dissent, Judge Clevenger agreed with the elimination of the points-of-novelty test, but disagreed with details of the majority opinion. Namely, Judge Clevenger warned against conducting the ordinary observer test by “dissection of a design as a whole into its component pieces.”

As recognized by the majority, the ordinary observer test requires assessment of the designs as a whole. . . . I agree that the differences in the inner sole designs are to be assessed as part of the anticipation inquiry. But the differences in the inner sole designs must be appreciated in conjunction with all of the design differences. This is so especially with regard to the differing number and arrangement of the circular openings on the upper of the clogs. . . . The effect of the summation of all the design differences is what counts, not the comparison of differences one by one, isolated from each other. Such an approach invites the problems we sought to eliminate by rejecting the “point of novelty” test. . . . Partial judgments of anticipation on segments of a design prohibit assessment of designs as a whole, in violation of long-standing law, starting with Gorham.