Although I have some problems with the USPTO’s claim of authority to act, prudent patentees will submit a PTA reconsideration form for patents issued since August 1, 2009 that might be owed additional patent term due to the Wyeth decision.

The recently distributed form (Titled a Request for Recalculation of Patent Term Adjustment in view of Wyeth) is exceedingly simple and requires only basic information regarding the patent and a signature. The applicant is not even required to indicate a belief that additional patent term is due. Forms are due on a rolling basis – always within 180-days of patent issuance. Thus, form should be immediately submitted for patents issued in early August, 2009.

Although PTA calculation is somewhat complex, the Wyeth change only impacts patents that meet the following criteria: (1) application actually filed on or after May 29, 2000 and (2) prosecution pendency of greater than three years. The vast majority of impacted cases will also include (3) a file history showing that the PTO delayed in examining the application during the first three years of pendency. The most likely PTO delay is that the Office waited more than 14-months before providing an initial examination response such as an office action rejection; restriction; or notice of allowance. Although only an educated guess, I suspect that the median additional term will be a bit under 1-year. 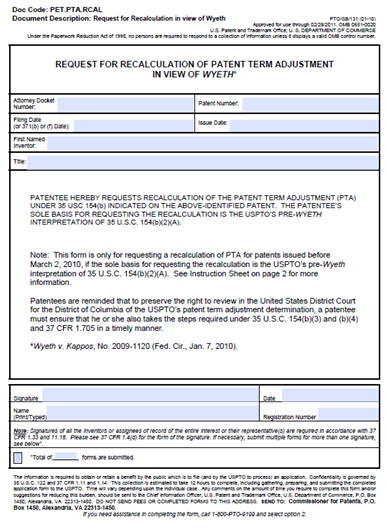