This is Part IV of my series on the relevance of the invention date in patent prosecution. You may download my entire paper here.This part discusses the results of a survey on the impact of a switch to a "first-to-file" system.

In the summer of 2009, I conducted an electronic survey of 1141 responders—mainly self-identified U.S. patent law professionals. These individuals primarily self-identified as U.S. patent attorneys and agents and patent litigators. The purpose of the survey was to elicit practitioner estimates of the reliance upon invention-date-based novelty rights during patent prosecution. In creating the survey, I sought to obtain both quantitative and qualitative results. Thus, the survey asked applicants to select objective responses from a list of choices and provided an opportunity for applicants to more fully explain their answers.

Switch to First to File: The survey asked responders whether they support a move to a first-to-file system. A small majority of the U.S. attorney and patent agent responders (55%) indicated that they did not support such a move. The responders were given space to provide short written statements regarding their preference for or against a move to first-to-file. The statements largely track the historic first-to-file debate and create a richer data set susceptible to qualitative analysis and categorization according to a set of iteratively created themes that emerged from the statements for each statement received.  The themes in each statement are identified and tallied in Table 10. 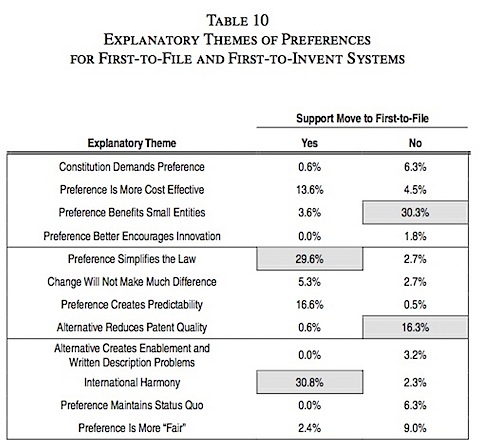 50 thoughts on “The Relevance of Invention Date in Patent Prosecution: Part IV (Survey)”