Two-weeks ago, I reported on the rising number of patent grants at the PTO. That trend has continued.  The chart below shows the average number of patents issued per week through May 11, 2010.  In the past three weeks, the USPTO issued an average of 4,517 patents per week. That figure is more than 40% above the 2009 weekly average. 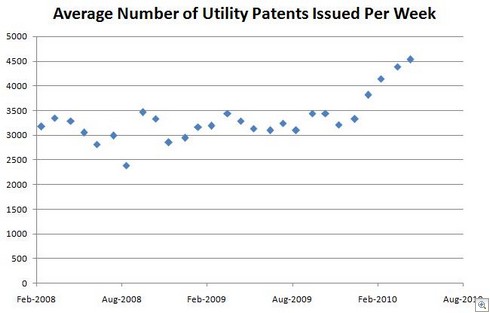 The USPTO issues new patents each Tuesday morning.  Of the weeks with the most patent grants, eight of the top-ten weeks are from this year (2010).  The other two high-grant weeks were in 1999 while Todd Dickinson was director.