In prior posts, I noted that the USPTO is issuing patents at an all-time-high-rate.  This increase is perhaps most dramatic in the art units that examine applications classified by the USPTO as "business methods."  This post explores the history and the numbers.

The USPTO patent examiner corps is organized into small technology-specific groups known as art units.  Each art unit has a manager that reports to a technology center director.  About twenty art units have been classified as generally dealing with “business method” patents. (See list of art units).  I’ll call these art units “business method art units” for lack of a better term.  All of the patents issued from these art units are classified in class 705. And, these are the patents and applications that are most likely to be affected by the decision in Bilski v. Kappos (2010).

Under former PTO Director Jon Dudas, the business method art units received special attention.  Individual examiners were given free power to reject pending applications as unpatentable, but claims could not be allowed as patentable until being reviewed by at least a “second pair of eyes.”  Under Director Kappos and Commissioner Stoll, the second pair of eyes regime has been eliminated and, as might be expected, the number of patents being allowed in these art units has risen dramatically. Perhaps coincidentally, this rise also correlates with the Federal Circuit’s October 2008 decision in Bilski.

The following two charts respectively show the number and percentage of patents that issue from the business method art units for each quarter (three-month period) going back to January 2005.  (2010 Q3 only includes two-weeks worth of data). As a bit of perspective, since January 2005, more than 900,000 utility patents have issued. Fewer than 9,000 are associated with these business method art units. 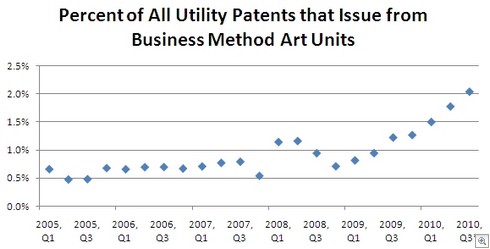 As the charts show, the number of patents issued by the business method art units is on the rise — both in terms of absolute numbers and as a percentage of patents being issued.

Most of the patents issuing from the business method art units are directed toward some type of computer software that helps solve a business problem. Newly issued U.S. Patent No. 7,747,465 is a typical example. The ‘465 patent claims a method and apparatus for determining the effectiveness of internet advertising. The claimed method does not explicitly recite any hardware except for a “manager console”, “dynamic sampling engine”, and “logic module.”  In response to a Section 101 rejection, the applicant amended its claims and then — without explanation — provided the conclusory argument that the application was “directed to statutory subject matter because the claims are either directed to statutory processes tied to a particular machine or directed to statutory apparatuses.”

One problem with studies of business method patents is that there is no accepted definition the term.  The 1998 State Street decision that jump-started business method patenting did not actually involve any method claims.  On the technology front, inventions that look like business methods are often examined in other art units. Rand Warsaw (Bernard Bilski's co-inventor) was issued a patent in 2004 on a method for providing energy efficiency changes based upon historic consumption and weather data.  That patent looks was examined by a non business method art unit in an entirely different technology center. (Patent No. 6,785,620).