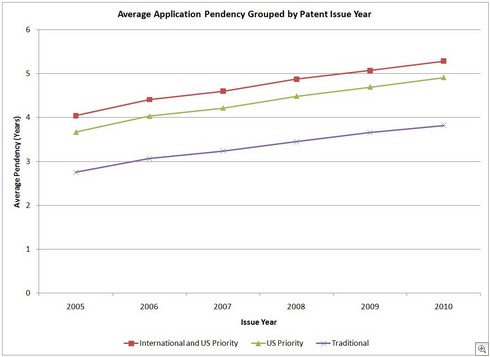 The above chart shows average application pendency for issued utility patents grouped by issue year. The chart presents three separate series that differ according to the filing-date used in the pendency calculation. The lowest data-series uses a traditional calculation that calculates pendency based on the actual US non-provisional filing date of the application in question without regard to any priority claims. The middle data-series calculates pendency based on the earliest US Priority claim. The highest data-series includes claims to both US and Foreign priority filings.

This chart is useful both for applicants and for third-parties considering moving forward with product development. Importantly, when a patent application is originally filed abroad, it usually take more than six-years before the first US patent is issued.