Last year, I investigated the role that the presumption of validity, and the evidentiary standard for rebutting it, played in validity challenges adjudged at the Federal Circuit. In March 2010, Professor Crouch graciously published the study's results in the Patently-O Patent Law Journal. [Link]. In response to Microsoft's petition for certiorari challenging the Federal Circuit's hard-line application of a clear and convincing standard, please find updated statistics below that include Federal Circuit decisions through October 2010. To learn the methodology for collecting the data, and to read my understanding of what they suggest (and do not suggest), please refer to the original publication. A spreadsheet of the updated data is available. [Link].

At least eighty-eight of the one hundred nineteen (74%) patent challenges analyzed were evidentiary-standard independent. Of these determinations, forty-one (47%) were based on a granted motion for summary judgment, six (7%) were based on a granted motion for JMOL, twenty-four (27%) resulted from a jury trial, and seventeen (19%) resulted from a bench trial. Twenty-one (24%) determinations were reversals and seventy (80%) resulted in invalidation. The Federal Circuit mentioned the presumption or the evidentiary standard for rebutting it thirty-four times (39%) and expressly applied them eleven times (13%).

At most, thirty-one of the one hundred nineteen (26%) patent challenges may have been evidentiary standard dependent. Of these determinations twenty-three (74%) resulted from a jury trial and eight (26%) resulted from a bench trial. None of these challenges resulted in invalidation, and each was upheld at the Federal Circuit. The Federal Circuit mentioned the presumption of validity or the evidentiary standard twenty-one times (68%) and expressly applied them fifteen times (48%).

Thanks to Lucas Watkins and Steve Kenny for helping to create this update. 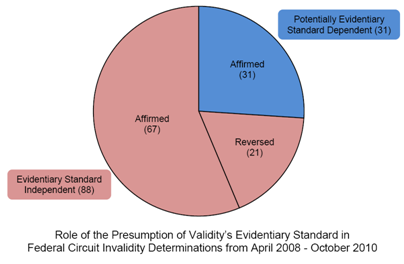 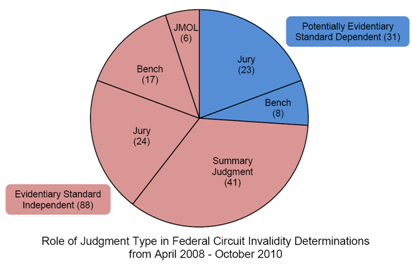 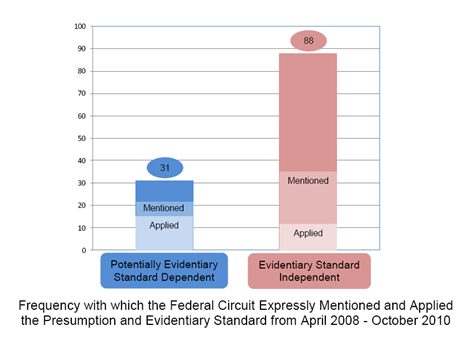