New Federal Circuit judge Kathleen O’Malley has begun her tenure at the Federal Circuit by joining with Judge Newman dissenting from the court’s denial of en banc rehearing. In her first patent opinion as a full member of the court, Judge O’Malley issued a tour-de-force – arguing that the original Abraxis panel erred by creating special federal rules governing assignment of patent rights rather than relying upon the usual rule that state contract and property laws govern the assignment of patent rights.

Problem of Ownership: In the original appeal, Judges Gajarsa and Linn found that the plaintiff, Abraxis, lacked standing because it did not own the patents in suit at the time that the complaint was filed. Although Abraxis had an asset assignment agreement from AstraZeneca with an effective date of June 2006, AstraZeneca had not actually received title from two of its subsidiaries by that date. Just before the lawsuit was filed, AstraZeneca received title to the patents from its subsidiaries and Abraxis argued that the 2006 agreement operated to automatically shift title to Abraxis. The chart below largely captures this (simplified) sequence of events. 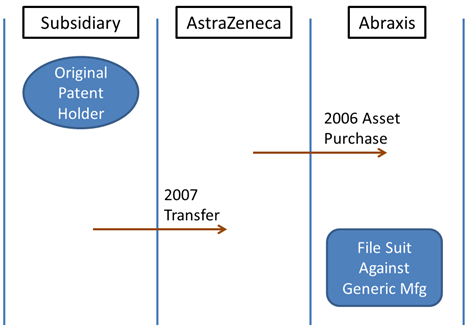 The agreements spelled-out that New York state law should be the source of contract interpretation for these transfers. When applying New York law, the district court sided with Abraxis – holding that the circumstances in this case meant that the 2007 transfer should be deemed retroactive to 2006, nunc pro tunc.

The New York law may seem a bit strange to some, but the dispute between Judge O’Malley and the majority opinion is not about the interpretation of New York law. Rather, the questions is whether patent ownership should even be governed by New York law at all – as opposed to the federal rules of patent ownership and transfer that stem from the statutory guidance of 35 U.S.C. § 261 (both patents and applications are “assignable in law by an instrument in writing”). In several cases involving the interpretation of patent rights, the Federal Circuit has taken the opportunity to develop its own law. Examples of these include, DDB Techs., L.L.C. v. MLB Advanced Media, L.P., 517 F.3d 1284, 1290 (Fed. Cir. 2008); Speedplay, Inc. v. Bebop, Inc., 211 F.3d 1245, 1253 (Fed. Cir. 2000) (stating that while the ownership of patent rights is typically a question exclusively for state courts, the question of whether contractual language effects a present assignment of patent rights, or an agreement to assign rights in the future, is resolved by Federal Circuit law); and Bd. of Trs. of Leland Stanford Junior Univ. v. Roche Molecular Sys., Inc., 583 F.3d 832, 841-42 (Fed. Cir. 2009) (cert. granted Nov. 1, 2010). The court claimed jurisdiction over the assignment/contract questions in these cases because answer to the questions would determine the plaintiff’s standing to sue for patent infringement.

Here, Judge Gajarsa also found the interpretation of the purchase agreement to be an issue of Federal Law – writing that “[n]otwithstanding New York law, it is not possible to transfer an interest in a patent unless one owns the patents at the time of the transfer.”

In dissent, Judge O’Malley would have left the interpretation of the contract and property rights transfer as a matter of state law.

[B]y virtue of this decision, this court now requires the application of Federal Circuit contract law to transfers of existing patent rights, without regard for the state law jointly chosen by the contracting parties. The consequences of this decision are not slight. This creation of a new body of law to govern transfers of patent rights – one applicable in this Circuit only – will disrupt substantial expectations with respect to the ownership of existing patents and impose unnecessary burdens on future transfers thereof. Parties may now be barred from pursuing claims for infringement of patents they indisputably own under state law, and choice of law provisions in large-scale asset purchase agreements such as that at issue here will become meaningless where patents are involved.

Because this decision conflicts with Supreme Court precedent and needlessly destabilizes parties’ expectations, we should take the opportunity to correct this flawed precedent.

This decision is important for several reasons:

11 thoughts on “Judge O’Malley in Dissent: Patent Assignments Should be a Matter of State Law”