CBT’s Patent No 6,587,550 covers a system of charging an “advertising fee in return for allowing” e-mail from an authorized sender to pass through an ISP.  Return Path’s Bonded Sender program (developed by Cisco) is very similar, except that the program has no advertising fee but rather charges an annual license fee.

On summary judgment, the N.D. Georgia District Court held the asserted claim 13 invalid as indefinite based upon what the court characterized as a “drafting error” made during prosecution.  The claim reads as follows:

13. An apparatus for determining whether a sending party sending an electronic mail communication directed to an intended receiving party is an authorized sending party, the apparatus comprising:

The claim indicates that the computer is programmed to “detect analyze the electronic mail” and the district court could not determine the meaning of “detect analyze” and therefore held the claim indefinite under 35 U.S.C. § 112.

On appeal, the Federal Circuit has reversed — holding that there is an obvious and correctable drafting error in the claim and that the district court has the power and obligation to correct that error in the claim construction process.

Correcting Drafting Errors in Court: The common law allows district courts to correct obvious errors in patent claims. However, that correction can only apply where “the correction is not subject to reasonable debate based on consideration of the claim language and the specification and (2) the prosecution history does not suggest a different interpretation of the claims.” Novo Industries L.P. v. Micro Molds Corp., 350 F.3d 1348, 1354 (Fed. Cir. 2003). Here, the court goes on to hold that this correction process must be done as part of the claim construction and must take into account how the correction impacts the scope of the claim.

As a claim construction issue, the Federal Circuit reviewed the District Court’s analysis de novo and held that the error was not problematic. In particular, because “detect” and “analyze” are such synonyms in this context that the particular correction made did not make much of a difference, but that the best correction is to add an “and” between the two limiting words. 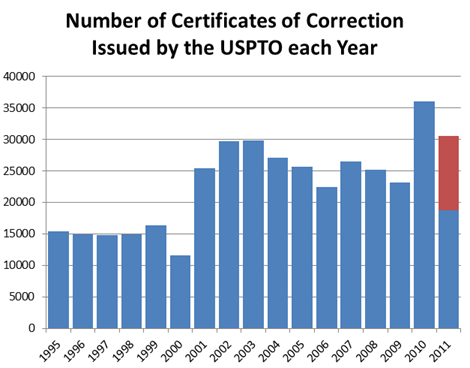 328 thoughts on “Correcting Patents at the District Court”