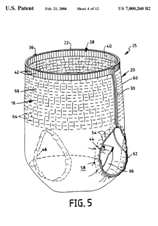 Diapers have been the subject of numerous patents and patent infringement lawsuits. In this case, K-C is suing its competitor, First Quality, for infringing more than a dozen diaper related patents.

The issue on appeal, however, focuses on a procedural matter: Whether K-C can be compelled to disclose information relating to prior alternative dispute resolution (ADR) proceedings between K-C and a different competitor, Proctor & Gamble. K-C argues that those ADR proceedings are privileged and therefore not discoverable.

The prior-ADR agreement between K-C and P&G were termed the ADR process a “non-binding arbitration.” In that process, both parties presented evidence to an agreed-upon neutral arbitrator who made a determination on the case. The loser of the arbitration was required to pay for cost of the arbitration. However, either party could reject the arbitrator’s decision and, if desired, file a district court lawsuit to resolve the dispute de novo. The agreement also included a provision that, if infringement was found, the losing party could avoid any damages at all by stopping the problematic activity within six months.

The Federal Rules of Evidence do not explicitly protect ADR proceedings except that Rule 408 prohibits a party from using certain compromises or “statements made in compromise negotiations” for the purposes of proving liability, invalidity of a claim, damages, or for impeachment of a witness. FRE 408. In addition, Rule 501 permits courts to apply “principles of the common law . . . in the light of reason and experience” in determining what additional information may be considered privileged.

Federal Mediation Privilege: Under the permission of Rule 501, the Pennsylvania District Court in this case followed other federal courts in adopting a “federal mediation privilege” that would privilege information and conduct associated with a mediated settlement process. Up to now, no federal court of appeals have recognized the privilege and, on appeal, the Federal Circuit refused to decide this issue. The appellate court wrote “we decline to determine if, in light of reason and experience, we should recognize a mediation privilege.”

Privileging settlement discussions and mediations has two primary goals: (1) to encourage parties to settle disputes outside of court; and (2) to encourage a frank and candid discussion of the case in the settlement process. If statements from the mediation could later be used in court, parties would be likely to either refuse to participate or merely use the process to puff-up their position. In this case the neutral was charged with making a decision on the merits – i.e., the arbitration setup did not encourage a frank and candid discussion of the case. It is this difference that leads courts away from extending the mediation privilege to the arbitration context.