A common mistake made by folks in business is to think of any patent issued in the past 20 years as being in-force. In fact, there are a number of ways that a patent can expire prior to that 20-year date. A patent that has expired no longer carries any rights of exclusivity for its holder.

By my calculations, there are about 2.1 million US patents in-force (as of May 1, 2012). To arrive at this number, I tallied the number of patents issued during the past twenty years (about 2.6 million) and then looked to see which of those patents had expired – either through completion of their term or through failure to pay a post-issuance renewal fee. The chart below provides an accounting of these results grouped by year of patent issuance. The older patents in my sample have all expired due to completion of the (then) 17-year term. More recently expired patents are typically associated with failure to pay a renewal fee. The most recent patents are essentially all still in-force because they have not yet had any post-issuance fees due. 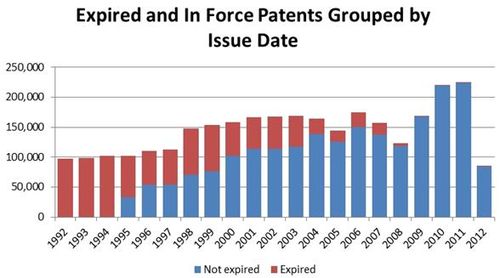 The bulk of in-force patents (~91%) are issued on patent applications filed after the June 8, 1995 patent term transition (Post-GATT). Patent applications filed after June 8, 1995 are given a term of 20-years from the application (priority) filing date. Patents issued prior to the changeover (Pre-GATT) have a term of 17-years from the patent issuance date. Applications pending on the changeover date are given the longer of the 17-years-from-issue and 20-years-from-filing terms. For original applications (i.e., those without a prior term-triggering priority filing), the new 20-year term typically benefits patent applicants because USPTO delays are generously credited to the applicant and added to the patent term. For applications that claim priority to PCT filings or US non-provisional applications, the filing-date approach tends to reduce the patent term. A few thousand patents eligible to claim the 20-year term have expired – they all exhibit the same properties of being filed after the 1995 changeover but claiming priority to a pre-1993 application.

There are several important caveats to my study here. (1) I did not include terminal or other disclaimers in the analysis and (2) I did not include term adjustments for USPTO or Governmental delay; and (3) I did not consider whether patents had been held invalid by a court or the USPTO. For several reasons, I do not believe that these issues would significantly impact the above conclusions. Terminal disclaimers are most important with regard to pre-GATT applications. However, most of those patents have already expired. In more recent applications, a terminal disclaimer tying the patent term to a family-member application typically does not change the 20-year term because all the family-member applications typically claim priority to the same original application that triggers running of the term. Term adjustments created for USPTO delay only apply to applications associated with a 20-year-from-filing term. Those adjustments will be important going forward for recently issued patents. However, term adjustments only have a minimal impact for this study because so few patents have expired due to conclusion of the 20-year-term and because the PTO backlog was not as serious in the mid 1990's. Finally, Court and USPTO decisions invalidating patents are few and far-between in comparison to the absolute number of patents in consideration here.

Update –  Although it is fairly clear from the text, my reference to GATT is directed to the General Agreement on Tariffs and Trade (GATT) as modifed in 1994 by the Uruguay Round of negotiations and implemented in the US by the GATT Uruguay Round implementing legislation.

6 thoughts on “How Many US Patents are In-Force?”