This is an interesting case to consider in parallel to the recent jury verdict in Apple v. Samsung. In that case, the jury recently found Samsung liable for infringing several Apple patents and awarded the iCompany more than $1 billion in damages. Meanwhile, Samsung has asked the district court to set aside the jury verdict as against the weight of the evidence.

In the present case of Mirror v. Apple, an E.D. Texas jury found Apple liable for infringing several of Mirror's patents and awarded over $600 million in damages. However, on motion from Apple, district court Judge Davis set aside the jury verdict and instead entered a judgment as a matter of law (JMOL) in Apple's favor – concluding that the patentee had failed to provide sufficient evidence of infringement. In a 2-1 decision, the Federal Circuit has affirmed that judgment – agreeing that (despite the jury verdict) "[t]he necessary evidence was not put before the jury to support the verdict of infringement or damages."

In the case, Mirror asserted that the joint operation Apple's Cover Flow GUI (see image below), Time Machine, and Spotlight Search infringes its U.S. Patent Nos. 6,006,227; 6,638,313; and 6,725,427 that cover a GUI implementation of lifestreaming. The inventors listed on these patents are Yale University computer scientists David Gelernter and Eric Freeman and were originally owned by Yale University. Gelernter's 1991 book titled "Mirror Worlds" is the namesake for the company. That book is written largely as a prophesy of what has become the internet as we know it. The original Mirror Worlds company is now defunct, with only its patent enforcement wing moving forward. 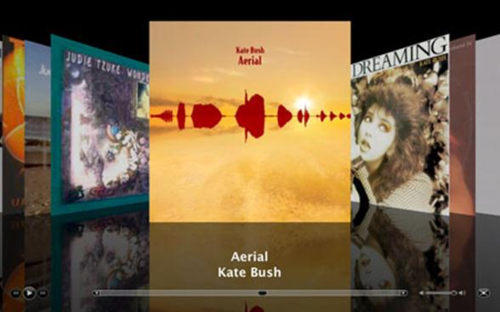 The federal circuit agreed that Apple avoided several of the patent claims because its mechanism does not include the equivalent of a cursor or pointer as required by the claims.

Inducement – Proving that the underlying steps were performed: Mirror had presented an inducement theory for several clams. Oddly, the majority began its analysis with a statement of the old law: "Inducement of infringement requires that there be a showing of an underlying act of direct infringement." Citing Linear Tech. Corp. v. Impala Linear Corp., 379 F.3d 1311, 1326 (Fed. Cir. 2004) and not citing Akamai.

Mirror's failure on inducement was that it did not present evidence to the jury showing that anyone had actually performed the steps of the patented method. Mirror did provide user manuals that arguably taught its customers how to use the software in an infringing manner. However, inducement requires evidence that the steps were actually performed.

Mirror Worlds cites no trial testimony of customers actually using each step of the method claims or tying together the various manuals, reviews, and surveys as evidence of actual use of the claimed method.

Regarding user manuals, the Federal Circuit has a somewhat nuanced rule when it comes to inducing infringement. If the infringing method is taught in a compact series of instructions then that can be sufficient to infer that the underlying infringement occurred. However, if the infringing use requires users to pick and choose from various instructions spaced throughout the manual, then a patentee must provide more proof that the underlying steps were actually performed. See E-Pass Techs., Inc. v. 3Com Corp., 473 F.3d 1213 (Fed. Cir. 2007).

In this case, the instruction manual was insufficient and Mirror failed to provide any more direct evidence that the underlying steps were performed. Thus, the appellate panel affirmed that Apple could not be held liable for inducing infringement.

Dissinting in part, Judge Prost would have found sufficient evidence that Apple's customers were infringing and that, therefore, Apple induced the infringement.

Query: Assume for a minute that Mirror could actually prove that Apple's customers are directly infringing one of the asserted patents and that it simply failed to produce the evidence at trial against Apple. Now that they have lost their case against Apple, an important legal question is whether or not the patentee could now bring a lawsuit against Apple customers and/or Apple retailers (such as Amazon or BestBuy)? As Prof Ochoa points out, this issue is whether defensive nonmutual collateral estoppel (AKA Issue Preclusion) would apply.