Here, S&N proposed that the jury only be asked to resolve the disputed questions of fact outlined in the Supreme Court’s landmark 1966 decision Graham v. John Deere — questions such as the level of skill in the art and the scope and content of the prior art.  Under S&N’s proposal, the judge would then take those answers and form a conclusion on the ultimate legal question of obviousness.  The patentees responsive brief identified this process as “one of the worst suggestions of all time.” Here, the district court took a somewhat middle ground – deciding to give the legal issue to the jury, but also ask the jury to identify the underlying factual Graham factors.  In addition, the district court indicated that it would see the jury’s obviousness conclusion “as advisory.”

The court wanted some factual guidance from the jury, but was also wary of asking the jury to write its response in narrative form. (Why?) In the end, the jury was asked several yes/no questions about the scope of the prior art; the differences between the prior art and the claimed invention; and whether secondary indicia of non-obviousness existed. After eight days of deliberation, the jury returned its verdict. Samples from the verdict form are shown below. 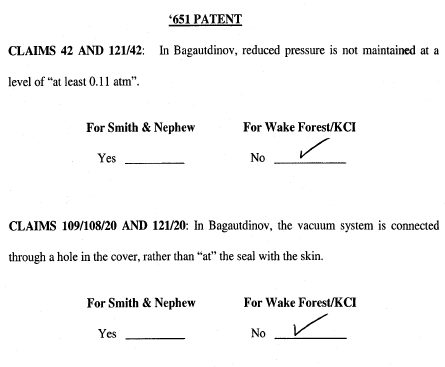 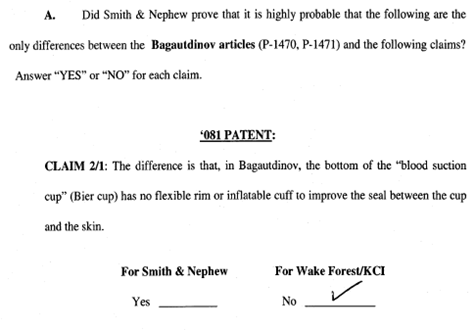 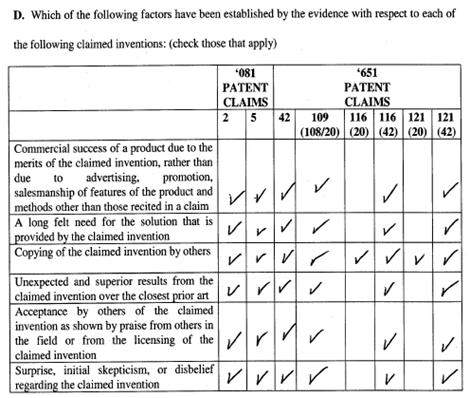 In its verdict, the jury concluded that the defendant had failed to prove the asserted claims to be obvious.

On JMOL, the district court rejected the jury verdict and held instead that the differences between the prior art and the claimed invention were so minimal as to be obvious to anyone of skill in the art. This holding thus left the asserted claims invalid. On appeal, the Federal Circuit has reinstated the jury verdict upholding the patent and held that the “district court committed error by failing to defer to the jury’s factual findings and granting JMOL on obviousness.” Professor Jason Rantanen wrote on this earlier:

Wake Forest, the patent holder, appealed a district court grant of JMOL of invalidity for obviousness of a claimed invention for treating difficult-to-heal wounds by applying suction (negative pressure). The CAFC reversed, holding that (1) the jury’s “advisory” opinion on the ultimate issue obviousness gave rise to implied findings of facts that the district court was required to accept provided that they were supported by substantial evidence, despite the presence of special interrogatories on the verdict form; (2) the jury’s implied findings of facts on the Graham factors were supported by substantial evidence; and (3) the ultimate conclusion of obviousness was that the claims were not obvious.

In arriving at the ultimate (legal) conclusion of nonobvious, the Federal Circuit focused its discussion on the lack of a reason to combine the prior art references (itself a factual finding), referencing concerns about hindsight reconstruction. In a statement suggesting a technology-based limitation on the use of common sense, the court held that “although expert testimony regarding motivation to combine is not always required, the technology at issue here is not the type of technology where common sense would provide the motivation to combine these references.”

Smith & Nephew challenged this working-back approach as wrong on (at least) two levels. First, since obviousness is a conclusion of law, the adjudged infringer argued that it couldn’t be the basis for presuming particular factual conclusions that were not expressly decided by the jury. This is even further bolstered by the fact that the district court judge identified the jury’s conclusion on obviousness as ‘advisory.’ The appellate court rejected those arguments by relying on its own precedent supporting the working-back approach and by determining that the district court’s reference to the ‘advisory’ nature of the jury verdict had no meaning.

The court went on to specifically indicate that it is proper to submit legal arguments to a jury:

[I]t is neither error nor dangerous to justice to submit legal issues to juries, the submission being accompanied by appropriate instructions on the law from the trial judge. The rules relating to interrogatories, jury instructions, motions for directed verdict, JNOV, and new trial, and the rules governing appeals following jury trials, are fully adequate to provide for interposition of the judge as guardian of the law at the proper point and when necessary. There is no question that the judge must remain the ultimate arbiter on the question of obviousness. He or she exercises that role first in exercising the judge’s duty of giving proper instructions on the law to the jury before it considers its verdict. The judge exercises control on the question again when presented with a motion for JNOV or new trial. In no sense need the judge abdicate the guardianship role.

15 thoughts on “Who Decides Obviousness: Judge or Jury?”