I have a policy that I don’t hire anyone who sues me. If you sued me, I would actually take that personally. So does Micron. In a letter to University of Illinois engineering professors, Micron’s hiring coordinator wrote the following:

Because Micron remains a defendant in a patent infringement lawsuit that UIUC filed against Micron in Federal court in Illinois on December 5, 2011, effective immediately, Micron will no longer recruit UIUC students for open positions at any of Micron’s world-wide facilities.

. . . . [T]he Micron Foundation has endowed chairs at the College of Engineering and has sponsored student scholarship and professor research. However, because UIUC’s suit imposes costs and risks on Micron that are inconsistent with collaborative relationships among Micron, UIUC, and its students, Micron must regrettably indefinitely suspend its recruitment of UIUC students and likewise suspend participation in other joint activities.

In a motion for temporary injunctive relief, the University has alleged that the email demand involved both “coercion” and “duress.”

. . . . Here, the harm in question, the pressure Micron has placed, and is likely to place, on the University, warrants redress. Such redress should take the form of an injunction that prohibits Micron from sending similarly coercive correspondence to the University.

Note here to Micron (and others), if you are ready to fund the University of Missouri Law School’s new innovation center, we are willing to work out a covenant not to sue.

The letter, with highlights from UIUC’s counsel. 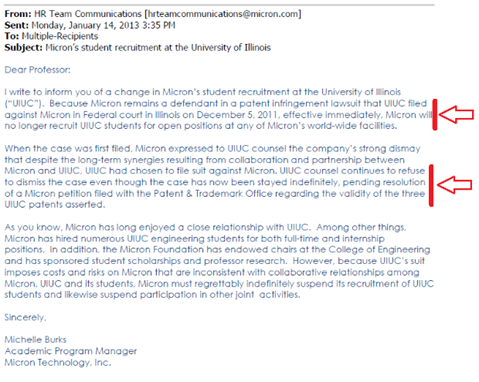 58 thoughts on “Although “without tact”, Micron’s retaliatory decision to stop hiring University of Illinois Graduates is not Illegal”