In the last four months of 2012 about 4,000 intellectual property lawsuits were filed in federal courts. Of these, about 2,000 were patent cases along with 1,000 copyright and 1,000 trademark cases. Patent litigators are well aware of the ongoing popularity of the Eastern District of Texas and the rising popularity of the Delaware court. I wanted to look at how that concentration is different on the copyright and trademark side. It is easy to draw two quick conclusions from the case filings. First, I note that the most popular patent infringement jurisdictions are among the least popular jurisdictions in the other two areas. Very few copyright or trademark cases are filed in EDTX or DDEL. Second, I can conclude that the patent litigation cases are much more highly concentrated in a smaller number of jurisdictions than that of either copyright or trademark. (One measure of this is that the top three patent jurisdictions have 59% of the patent cases while the top three copyright and trademark jurisdictions have 32% and 28% respectively). Part of the explanation for the high concentration of patent cases is the clustering of NPE cases that involve a single plaintiff against multiple defendants filed before a single court. However, I would suggest that the driving explanation is simply the popularity of EDTX and DDEL. The appellate courts provide even more disjunction between the IP regimes since almost all of the patent litigation appeals are heard by the Court of Appeals for the Federal Circuit whereas that court sees very few copyright or trademark infringement actions. Likewise, the appellate courts that hear the most copyright and trademark appeals never hear patent appeals. As I have written previously, the bulk of governmental money spent on administering intellectual property rights goes through the US Patent & Trademark Office (PTO) — an executive agency housed within the Department of Commerce. The US Copyright Office, however, is not part of the administration but rather is housed within the Library of Congress, which itself is managed by Congress rather than the President. Thus the US Copyright Office does not officially represent the Administration or shape Administration policy.

All of this is an odd setup – especially with the rising and overlapping market role for intellectual property rights. From a theoretical standpoint, it is unclear whether the fractured structure leads to rights that are either too strong or too weak. What we can tell is that the structure leads to a lack of coordination of the various IP systems within the US.

For its part, the US Supreme Court has an almost regular practice of doing a comparative analysis in its intellectual property cases that considers how a particular issue is handled in other areas of IP law. Harmony in these areas is part of what the court calls a ‘carefully crafted balance.’ To this end, the court has recognized that the scope and coverage offered by patent law is relevant to the relevant scope and coverage of copyright and trademark protection. Likewise, in the upcoming fee-shifting cases, we can expect that the court will use copyright and trademark precedent as a guide. Perhaps unfortunately, few lower courts have the cross-IP-jurisdictional experience of the US Supreme Court that would be necessary to reasonably draw the same types of parallels.

The chart below shows the most-popular 25 jurisdictions for case filings in the final four months of 2012. 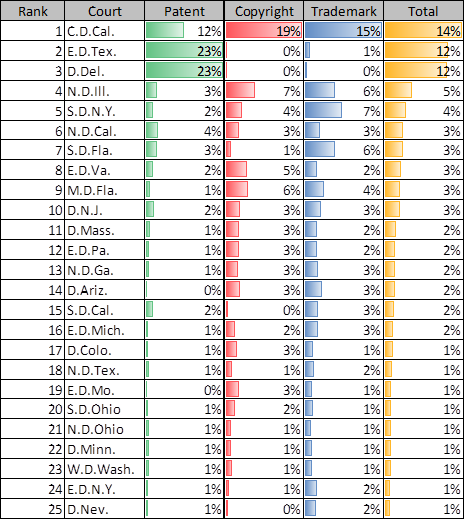 Thanks to LexMachina for this data.

20 thoughts on “Disjunction in IP Litigation: Patent Courts are not Copyright Courts”