In the cases of Twombly (2007) and Iqbal (2009) (Twiqbal), the Supreme Court substantially raised the pleading standard for federal cases by requiring that the pleadings allege sufficient detail to demonstrate that their claims are “plausible.” These cases have had a dramatic impact on civil litigation in Federal courts. This is evidenced by the fact that these cases have been cited in over 10,000 decisions over the past few years.

Patentees filing infringement actions have not been directly affected by the modified precedent because of a quirk of federal civil procedure. The FRCP appendix includes a form patent infringement complaint and FRCP Rule 84 indicates that the “forms in the Appendix suffice under these rules.” The patent infringement complaint form (Form 18) is incredibly bare-bones and basically only requires an allegation that the plaintiff has rights in the patent and that the defendant is infringing the patent. Based upon the scheme set up by the Rules Enabling Act (1934), the Judicial Conference proposes any amendments to the rules of civil procedure; those proposals are then approved by the Supreme Court and then reviewed by Congress before becoming law.

Within the next couple of years, this form complaint rule is likely to change, either by action to change the rules proposed the Judicial Conference or else by Congressional legislation.

In fact, in the Judicial Conference Advisory Committee has already proposed elimination of FRCP Rule 84 and the form complaints. [Link] The result would be that Twiqbal would apply to patent infringement complaints. Although this change would not raise complaint pleading standards to that of the Goodlatte proposal, it still represents a major heightening of that initial pleading hurdle. 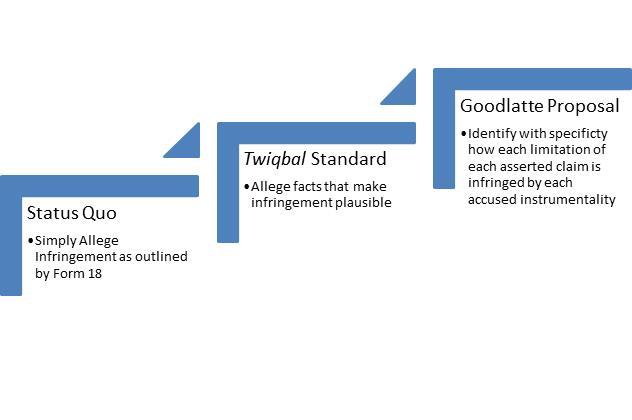 In its proposed rule change, the Judicial Conference Advisory Committee explains its proposal with reference to patent law:

A further reason to abrogate Rule 84 is the tension between the pleading forms and emerging pleading standards. The pleading forms were adopted in 1938 as an important means of educating bench and bar on the dramatic change in pleading standards effected by Rule 8(a)(2). They — and all the other forms — were elevated in 1948 from illustrations to a status that “suffice[s] under these rules.” Whatever else may be said, the ranges of topics covered by the pleading forms omit many of the categories of actions that comprise the bulk of today’s federal docket. And some of the forms have come to seem inadequate, particularly the Form 18 complaint for patent infringement. Attempting to modernize the existing forms, and perhaps to create new forms to address such claims as those arising under the antitrust laws (Twombly v. Bell Atlantic, 550 U.S. 544 (2007)) or implicating official immunity (Ashcroft v. Iqbal, 129 S.Ct. 1937 (2009)), would be an imposing and precarious undertaking. Such an undertaking might be worthwhile if in recent years the pleading forms had provided meaningful guidance to the bar in formulating complaints, but they have not.

The point here is that the pleading standards are outdated and today offer a loophole for certain plaintiffs without any justification for such a loophole.

The committee goes on to make a clear misstatement that “few if any lawyers consult the forms when drafting complaints.” Rather, in the patent infringement world, it is knowledge of that form that serves as the basis for many patent complaints. However, that misstatement does not sink the proposal in any way.