Millipore’s U.S. Patent No. 6,032,543 covers an aseptic system designed to add & remove fluid from a container without contamination.  The asserted claims require, inter alia, a “removable, replaceable transfer member . . . comprising a holder, a seal for sealing said aperture, a hypodermic needle . . . wherein the seal has a first [bellows-shaped] end . . . and a second [self sealing membrane] end.” Now, it turns out that the accused AllPure TAKEone industrial aseptic sampling system has all these elements – a holder, a seal with the bellow and membrane ends, and the needle.  In addition all of these parts are removable and replaceable. 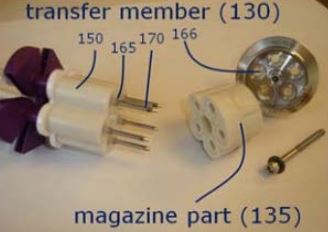 AllPure’s key difference from the patented claim is that the collection of these parts are not removable as a unit but rather may only be removed by dis-assembly.  In construing the claims, the district court wrote: ““the [remove] implies movement or separation of something as a whole, whereas [disassemble] implies deconstruction. . . What Millipore characterizes as removal of a transfer member from the magazine part is, in fact, disassembly of a transfer member.”  Based upon that characterization of the patent and the accused device, District Court Judge Woodlock (D. Mass) found that the claims were not infringed.

We agree with AllPure and the district court. If a transfer member does not exist when the device is disassembled, as even Millipore’s counsel admitted, then there is no genuine issue of material fact over whether the TAKEONE device contains a “removable, replaceable  transfer member” as is literally required by claim 1.

Doctrine of Equivalents: Section 271 of the patent act identifies an infringer as someone who “without authority makes, uses, offers to sell, or sells any patented invention.”  Although the “patented invention” is defined by patent claims, courts have long allowed patentees to enforce their exclusive rights to stop activity that is just-outside the literal scope of the claims. This doctrine of equivalents (DOE) has been with us for over 150 years  See Winans v. Denmead, 56 U.S. 330 (1853)(‘The exclusive right to the thing patented is not secured, if the public are at liberty to make substantial copies of it, varying its form or proportions.’).  However, the doctrine has been substantially limited by the all-elements-rule, Warner-Jenkinson Co. v. Hilton Davis Chem. Co., 520 U.S. 17 (1997), prosecution history estoppel, Festo Corp. v. Shoketsu Kinzoku Kogyo Kabushiki Co., 535 U.S. 722 (2002), and the doctrine of vitiation. see Wright Medical Technology, Inc. v. Osteonics Corp., 122 F.3d 1440 (Fed. Cir. 1997).

Narrowing Amendment Estoppel: In this case (as in most patents), the applicant had amended its claims during prosecution following a rejection by the patent office examiner to specify the portions of the seal (bellow-shaped and membrane ends).  Although at the time the applicant also made a broadening amendment, this particular amendment was seen as narrowing and designed to recite limitations not found in the prior art.  In particular, following the amendment the patentee argued that “none of the references show or disclose a seal formed like the present one.”  A narrowing amendment is seen as a no-no for the doctrine of equivalents since allowing DOE would essentially allow the patentee to regain patent scope that had been given-up during the prosecution process.  Under Festo, a narrowing amendment during prosecution creates a rebuttable presumption of prosecution history estoppel (PHE) with the result of estopping the patentee from claiming equivalents (DOE) to recapture the narrowed scope.  Here, the appellate panel found that presumption had not been overcome and thus that the patentee was estopped from claiming equivalents.

Narrowing of Sub-Assembly = Narrowing of Whole Assembly: A problem with the defendant’s argument here (and what Judge Prost failed to explain) is the linkage between the narrowing amendment and the asserted equivalents.  In particular, the narrowing amendment added limitations to the definition of the seal sub-assembly but the claimed equivalent was focused on the nature of the whole accused assembly as being disassemblable rather than removable as claimed. The only clue offered by the court is one phrase indicating that the amendment “narrows the seal limitation, which in turn narrows the transfer member limitation.”

Hierarchy of Elements: The battle over a hierarchy of limitations is common in modern doctrine of equivalents. Typically, the battle plays out in terms of the all-elements rule that requires the accused infringer practice each element of the asserted claim either literally or by equivalent.  For patentees, this type of equivalents is typically easier to prove when each “element” is seen as a grouping of limitations – such as the “removable, replaceable transfer member” – and defendants typically look to further granularize the invention so that the “removable” limitation itself would be an element that must satisfy the function-way-result test.   In this case – involving prosecution history estoppel – the patentee would have been better off with the more granularized framework in order to logically separate the “removable” limitation from the narrowed seal limitations.  However, the appellate court glosses-over all of this analysis in its short decision with the unfortunate result of leaving district courts to do the same.

54 thoughts on “Doctrine of Equivalents: What Elements Are you Narrowing?”