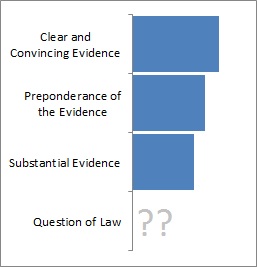 In a split opinion, the Federal Circuit has affirmed the district court’s determination that Calcar’s three asserted patents are unenforceable due to inequitable conduct during prosecution.  The case teaches about “but-for materiality” and holds that the withholding of information can be the but-for cause of a patent issuance even if that information is insufficient to render any of the patent claims invalid in court. See also Therasense. The court winds this tale by noting the evidentiary difference: PTO only requires a preponderance of evidence of nonpatentability while invalidation in court requires clear and convincing evidence.

Duty of Disclosure, Candor, and Good Faith Dealing: Although lawyers always bear certain good faith obligations, those practicing before the before the PTO bear a more significant duty of disclosure, candor, and good faith dealing.  Failure to meet this high standard has a number of potential repercussions — for patent owners, the greatest issue is the potential that resulting patents may be held undenforceable due to inequitable conduct in proceedings before the USPTO.  Importantly, for any particular patent case, the duty of disclosure extends to all “individuals associated with the filing or prosecution.” 37 C.F.R. 1.56. This certainly includes named inventors as well as “every other person who is substantively involved” with the application.  Id.

Therasense En Banc: In Therasense (Fed. Cir. 2011) (en banc), the court made it a bit more difficult to render a patent unenforceable by requiring (a) proof of a ‘bad’ act that is a but-for cause of the patent issuing as well as (2) particular intent that the act was intended to deceive the PTO.  Conventional wisdom is that Therasense (as well as Excergen) has dampened many claims of unenforceability — especially those where the allegation is merely a failure to fully disclose to the USPTO all information related to patentability of the case in question.

Failure to Disclose Photos Taken of Prior Art: This case involves a family of three patents directed to a multimedia system used to access vehicle information and control vehicle functions.  The district court found that Calcar’s founder and named inventor Michael Obradovich had particular information about a prior Acura 96RL navigation system that he failed to submit to the PTO.  In particular, prior to starting work on his invention, Obradovich had driven the Acura, operated its navigation system, and taken photographs as well written a “QuickTips” guide.  Although the application identified the 96RL system as prior art, Obradovich did not write a summary of his experiences or submit the photographs or the owner’s manual.  The district court found this failure to be material to patentability and also that the “only reasonable inference from the evidence” was that Obradovich withheld the information with “specific intent to deceive the PTO.”  On appeal, the Federal Circuit affirms.

But Obviousness is a Question of Law: Under Graham and KSR, obviousness is a question of law that relies upon an underpinning of factual determinations. Although the court ignores the Graham inquiry in its analysis here, it appears that the only disputed issue is the ultimate legal question of obviousness and not the factual underpinning.  The fact that we’re talking about a question of law is important because questions of law are not governed by evidentiary standards but rather both the PTO and Courts must approach that ultimate question with the same framework of simply correctly determining the law based upon the evidence presented.

The majority opinion was written by Chief Judge Prost and joined by Judge Wallach. Judge Newman wrote in dissent.

Judge Newman focuses on an interesting issue. She argues that, rather than speculating about what the PTO might do, lets look at what it actually did when it saw the references.  Namely, the ‘497 patent (invalidated by the jury and not at issue here) was reexamined by the PTO during the course of the litigation and the examiners reviewed the previously non-submitted prior art and then confirmed all of the claims as patentable.  However, Judge Newman’s arguments appear more appropriately addressed to the earlier court opinion in this case.

Nonetheless, my colleagues rule that the patents are unenforceable based on the initial failure to send the Owner’s Manual and photographs to the PTO. The inequitable conduct with which Mr. Obradovich is charged is that he “did not tell Mr. Yip [his patent attorney] about his experience with the 96RL, nor did he provide Mr. Yip with the Owner’s Manual or the photos of the navigation system display screens.” Dist. Ct. Op. at 11. However, the PTO established, on reexamination of the ’497 patent, that the purportedly withheld information was not material to patentability. In accordance with Therasense this ended the inequitable conduct inquiry, for the PTO sustained patentability in view of this information.

In addition, there was no evidence of intent to deceive the PTO. The panel majority impugns Mr. Obradovich’s credibility, although they do not say what is disbelieved. The jury heard and saw Mr. Obradovich, on examination and cross-examination, and did not find deceptive intent. My colleagues “infer” clear and convincing evidence of deceptive intent from Mr. Obradovich’s initial failure to send his patent attorney the Owner’s Manual and the photographs of the Acura display. They postulate that a savvy inventor and businessman such as Mr. Obradovich
would have known the information was material to patentability and would therefore withhold it in order to deceive the PTO. However, a more likely inference is that a savvy inventor and businessman would know that a patent obtained through concealment of a material reference is not a reliable commercial asset.