As part of a license agreement, Schoeller Arca granted Buckhorn a license to its U.S. Patent No. 5,199,592 in a form termed “co-exclusive” because Schoeller retained a right to practice the invention.  The agreement gave Buckhorn the right to control any enforcement of the patent against third parties but included an indemnification provision where Buckhorn would reimburse Schoeller for its potential costs associated with an enforcement if it needed to be joined as a co-plaintiff.

Later Buckhorn sued Orbis for infringing the patent.  After a threatened dismissal for a missing necessary party, Schoeller joined Buckhorn as co-plaintiff.  It turned out, however, that Schoeller had previously licensed the patent to Orbis and failed to inform Buckhorn! The district court dismissed the case based upon the license and – after some procedural issues – levied attorney fees against Schoeller. These attorney fees resulted from the terms of the original Schoeller-Orbis license agreement that included prevision awarding fees to the prevailing party in any license dispute. The court then held Buckhorn liable to Orbis for the attorney fees based upon its indemnification agreement with Schoeller.

Unlike many other attorney-fee issues in patent litigation, the awards in this case are fully derived from the two agreements between the parties. 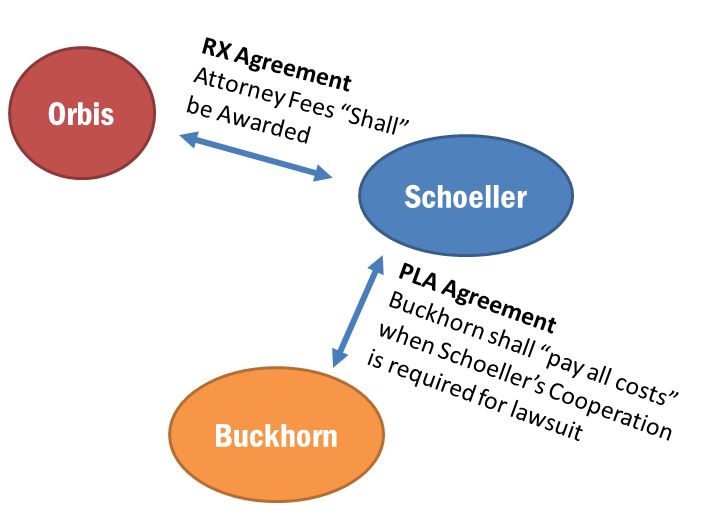 On appeal, the Federal Circuit first agreed that Buckhorn cannot be liable for the attorney fees under the RX Agreement (Orbis-Schoeller) applying basic contract privity law. [Buckhorn may well have been seen as successor-in-interest if patent had been sold rather than co-exclusively licensed.]  In the second step, the Federal Circuit found that, while Buckhorn may need to indemnify Schoeller, it cannot be held liable to Orbis based upon the PLA agreement to which Orbis was not a party.  For this conclusion, the Court did consider New York law – since that was the choice-of-law for the PLA agreement.  Under NY law, an incidental beneficiary of a contract does not have a right to enforce the contract. [A true third-party-beneficiary would have such a right, but only when the contract is designed for their benefit, not the case here.]

Outcome: Buckhorn is not liable to Orbis for the attorney fees.

This case relates somewhat directly to the ongoing legislative debate over attorney fees. The legislative proposals include veil-piercing mechanisms to allow a prevailing defendant to collect attorney fees against investors and others interested in the litigation when the losing-patentee is unable to pay a fee award.  The decision here serves as an indication that the Federal Circuit is unwilling to make this type of policy-change from the bench — thus putting more pressure on congress to make the change.  At the same time, the opinion here notes that the prevailing defendant did not take advantage of the steps available under federal and state laws to collect from Schoeller — resulting in no-sympathy from the court.