This post adds somewhat to my prior one titled Citing References.

A recent draft article by Professors Jeffrey Kuhn (UNC-Business) and Kenneth Younge (EPFL) along with former USPTO Economist (and now professor) Alan Marco looks more in-depth at patent citations and arrived at a conclusion parallel to mine:

Specifically, we observe a dramatic increase in the number of citations generated per year and relate that change to a small proportion of patents flooding the patent office with an overwhelming number of references.

The paper divides patents four categories according to the quantity of prior art citations.  Rather than call them “quartiles” the authors opt for names that relate to the examiner’s ability to review the corpus of submissions (given their time constraints):

Matching my parallel work, the authors write: “By 2014, patents that cite an “extreme” or “impossible” number of citations are responsible for more than 46% of all patent citations, even though they comprise less than 5% of all patents issued in that year.”  In my data – looking at patents issued Jan-Aug 2017 – I found that the skew has increased so that the “impossible” patents now cite half of all applicant-submitted patent citations.  [Note Here that Kuhn looks at citation of US patent documents only, while my approach considered all citations, but limited them to  those designated as applicant cited.] 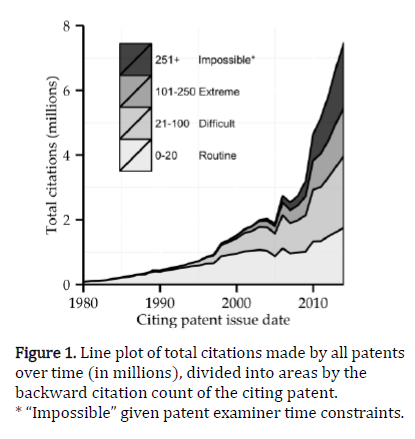 When focusing on those “impossible” patents, the team concluded that “the citations generated by highly citing patents appear to be particularly uninformative.”  This conclusion is based upon their conclusion that many of the cited references are dissimilar to the claimed invention.

Kuhn, et al., is directed at academic researchers who use patent citation in their empirical research on business and technological trends.  Thus, the conclusions drawn are not designed to either indict or improve the patent system – rather, the primary conclusion is that researchers should consider this skew when making assumptions about the importance of patent citations.  “The main contribution of this article is to provide prima facie evidence that the citation generating process is now generating significant measurement error for many academic studies.”

48 thoughts on “More on Patent Citations and the Impossibility Skew”