Assessing the Need for Legislative Reform of Patent Eligibility in the Mayo/Alice Era: Final Report of the Berkeley Center for Law & Technology Section 101 Workshop [Read the Full Report] 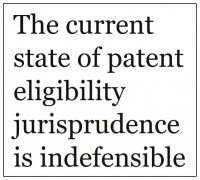 Over the past five years, the Supreme Court has embarked upon a drastic and far-reaching experiment in patent eligibility standards. Since the founding era, the nation’s patent statutes have afforded patent protection to technological innovations and practical applications of scientific discoveries. However, the Supreme Court’s 2012 decision in Mayo Collaborative Services v. Prometheus Laboratories imposed a new limitation on the scope of the patent system: that a useful application of a scientific discovery is ineligible for patent protection unless the inventor also claims an “inventive” application of the discovery. The following year, the Court ruled that discoveries of the location and sequence of DNA compositions that are useful in diagnosing diseases are ineligible for patent protection. And in its 2014 Alice Corp. v. CLS Bank International decision, the Court ruled that software-related claims are ineligible for patent protection unless the abstract ideas or mathematical formulas disclosed are inventively applied.

These decisions sent shock waves through the research, technology, business, and patent communities. Medical diagnostics companies experienced a dramatic narrowing of eligibility for core scientific discoveries. Reactions within the information technology community have been mixed, with some applauding the tightening of patent eligibility standards on software claims and the opportunity to seek early dismissal of lawsuits, particularly those filed by non-practicing entities, and others criticizing the shift in patent eligibility. Several members of the Federal Circuit bluntly criticized the Supreme Court’s shift in patent eligibility standards on jurisprudential and policy grounds. Additionally, the Patent Office has struggled to apply the Supreme Court’s new and rapidly evolving standards.

As this sea change unfolded, many patent practitioners, scholars, PTO officials, and jurists hoped that the Supreme Court would provide fuller and clearer guidance on patent eligibility standards. In the aftermath of the Supreme Court’s rejection of the certiorari petition in Sequenom, Inc. v. Ariosa Diagnostics, Inc.—a case that many Federal Circuit jurists, scholars, and practitioners thought to be an ideal vehicle for clarifying patent eligibility standards, or for reexamining Mayo—we began planning a roundtable discussion among leading industry representatives, practitioners, scholars, policymakers, and retired jurists to explore the patent eligibility landscape and possible legislative solutions to the problems that have emerged.

We sought participants with significant knowledge and experience in the key industries affected by the shift in patent eligibility standards—principally the bioscience and software/information technology fields. To promote candid discussion among these participants, we established the following ground rules: (1) Participants would be free to use the information received, but neither the identity nor the affiliation of the speaker(s) could be revealed; (2) We would prepare a report describing the results of the workshop—and that report would not attribute statements or views to individuals (other than the co-convenors); and (3) The report would list the participants and be made available to the public through BCLT.

As explicated in the Report, a consensus emerged that the current state of patent eligibility jurisprudence is indefensible as a matter of legal principle and is seriously undercutting incentives in sectors of the biotechnology industry. The workshop revealed broad agreement that the Supreme Court’s patent eligibility jurisprudence has diverged from the Patent Act’s text and legislative history, as well as long-standing jurisprudential standards. The participants also agreed that the Supreme Court’s ostensible rationale for its § 101 jurisprudence lacks a sound foundation, and that its formulation of the inventive application standard is grounded on a profound misapprehension of key historical precedents.

Furthermore, the workshop revealed a consensus that it is unlikely that the Supreme Court will reconsider the patent-eligibility issue in the foreseeable future. Conferees also doubted that the Federal Circuit will confront the core concerns surrounding patent eligibility. The USPTO has tended to be reactive only, or has adopted what some conferees viewed as unduly rigid interpretations of the case law.

Thus, legislative reform will be necessary to effect significant change in patent eligibility standards. Participants largely agreed that legislation would be necessary to address the problems that have emerged for bioscience researchers. Nonetheless, there was disagreement on the need for legislative reform of patentable subject matter relating to software and information technology. Moreover, there was a lack of agreement on the best solution to problems, and none of the current legislative proposals garnered consensus.

While nearly all of the conferees recognized that this state of the law poses serious concerns for bioscience research and development, there existed substantial reluctance on the part of some software industry representatives about pursuing legislative reform that could increase patent assertion activity and raise defense risks and costs in the software field. Some participants also thought that the courts should be given time to develop an appropriate screen for the eligibility of software patents and saw some progress in the developing case law.

This suggests to the workshop convenors and authors of the report (the three of us) that the most fruitful approach to reform legislation would restore the traditional patent eligibility standard at least for bioscience advances—that is, establishing that conventional applications of scientific discoveries are eligible for patent protection—while addressing concerns about cumulative creativity and abusive patent assertion. Such additional provisions could include the following: (1) an expanded experimental use exception at least for doctors and medical researchers; (2) exclusion of non-technological subject matter, notably pure business methods (a technological arts test); (3) a mechanism to encourage courts to consider 12(b)(6) motions directed to § 112 issues (as opposed to § 101 issues) early in patent case management; (4) fee-shifting aimed at discouraging nuisance value patent lawsuits; (5) higher thresholds for enhanced damages in the software field; and/or (6) shorter duration for algorithm-based inventions—i.e., where the point of non-obviousness is a computer-implemented algorithm. We further note that compromise legislation might also address distinctive issues relating to affected industries that lie outside of the patent field, such as reimbursement policies relating to medical diagnostics.

147 thoughts on “The Need for Legislative Reform: The Berkeley Section 101 Workshop”