Typical initial setup of a patent infringement lawsuit: the patentee (Stone’) sued Cook for infringement; Cook then requested an inter partes of the asserted patent.  What happened next was odd — after Cook refused a $150k settlement, Stone conceded the IPR (all claims then cancelled) as well as the lawsuit (dismissed with prejudice).

Note here that the invention looks pretty cool – an endoscope with a basket-type device for extracting stones from a human body — such as ureteral, kidney, or gall stones. U.S. Patent No. 6,551,327.  The problem apparently is the invention’s lack of novelty. 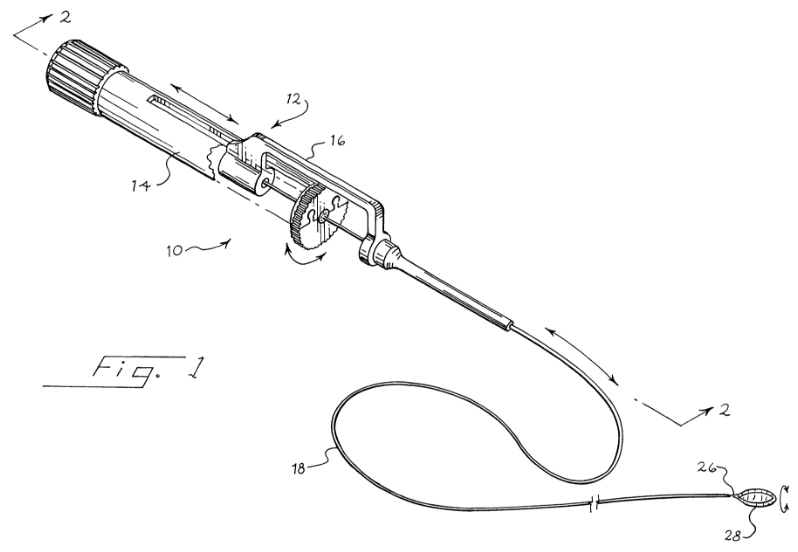 The Patent Act provides that a “court in exceptional cases may award
reasonable attorney fees to the prevailing party.” 35 U.S.C. § 285.  In Octane
Fitness, LLC v. ICON Health & Fitness, Inc., 134 S. Ct. 1749 (2014), the Supreme Court defined an “exceptional Case” as one that “stands out from others with respect to the substantive strength of a party’s litigating position (considering both the governing law and the facts of the case) or the unreasonable manner in which the case was litigated.”  That particular determination is made by a district court judge on a case-by-case basis after considering the “totality of the circumstances” and then given deference on appeal.  See Highmark Inc. v. Allcare Health Mgmt. Sys., Inc., 134 S. Ct. 1744 (2014).

While the Federal Circuit agreed that Cook had the better litigation position and may have been wronged, the court noted that Cook had “fail[ed] to provide early, focused, and supported notice of its belief that it was being subjected to exceptional litigation behavior further.” Quoting a recent informal opinion from Judge Guilford (C.D.Cal.), the appellate court wrote that a “party cannot simply hide under a rock, quietly documenting all the ways it’s been wronged, so that it can march out its ‘parade of horribles’ after all is said and done.” See Aten Int’l Co. v. Uniclass Tech., No. CV 15-04424-AG (AJWx), slip op. at 5 (C.D. Cal. Mar. 30, 2018) [AJWX Decision].  While neither Judge Guilford nor the Federal Circuit cited any precedent or statutory analysis for this implicit notice requirement, the court concluded that the reasoning of the approach is “both persuasive and applicable to this case.”

Notice Prior to Attorney Fee Request: A key requirement for sanctions under FRCP R. 11 (Rule 11) is to provide advance notice to the offending party.  While Section 285 does not expressly require notice, this line of cases suggests that such interim notice to both the opposing party and the court will serve as important aspects of the exceptional case determination.

I’ll note here that the notice is important for several reasons: (1) notice of bad-behavior or exceptionally weak arguments provides the opposing party with a chance to correct its approach in order to avoid undue expenses and hardships; (2) notice to the court will then give the court the ability to take immediate corrective actions in order (admonish the party) in order to avoid compounding the problem; (3) going through the steps of providing notice provides some modicum of evidence that the noticing party is actually being harmed by the bad behavior.