I wrote about this case in February 2019 under the Headline: Pepcid Complete Generic Does not Provide “Immediate Relief” and Therefore Does not Infringe.  The jury sided with the patentee and awarded $10 million in damages.  That verdict was overturned by the district court who concluded that no reasonable jury could find infringement based upon the evidence presented. And, as my headline suggests, the Federal Circuit affirmed the non-infringement holding. 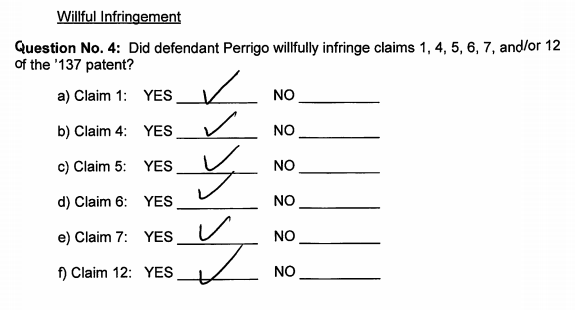 My original post focused on the patent law merits and avoided some of the appellate procedure issues that are the focus of a push by the patentee to the Supreme Court.

Note here, that the judgment is lacking somewhat because it is subject to an accounting and also consideration of enhanced damages for willful infringement. But, this is pretty standard — there is usually some amount of clean-up following judgment on the merits.

The basic appellate procedure question is whether this judgment is a “final decision” that must be appealed within 30 days. The question is important because Perrigo didn’t file an appeal within the 30 day requirement.  Here is the guidance:

In its unpublished order, the Federal Circuit worked through the details of what counts as a ‘final decision’ under section 1295. In general, a final decision is one that “ends the litigation on the merits and leaves nothing for the court to do but execute judgment.” Catlin v. United States, 324 U.S. 229 (1945) (citation omitted).  The law though has some amount of nuance. While compensatory damages are seen as a core element of the ‘merits’ litigation, attorney fee awards are not.

In papers recently filed with the Supreme Court, Brigham & Women’s has indicated its intent to petition for writ of certiorari on the final decision question — arguing that the Federal Circuit’s decision lacks authority and is contrary to several Supreme Court decisions, including Budinich v. Becton Dickinson & Co., 108 S. Ct. 1717 (1988) (a decision is final even without considering attorney fee motions — “A question remaining to be decided after an order ending litigation on the merits does not prevent finality if its resolution will not alter the order or moot or revise decisions embodied in the order.”); and Ray Haluch Gravel Co. v. Central Pension Fund, 134 S. Ct. 2205 (2014) (The fact that attorney fees are authorized by contract does not change the usual rule that attorney’s fees “do not remedy the injury giving rise to the action” and therefore not part of a merits decision.)

Some fee-shifting provisions treat the fees as part of the merits; some do not. Some are bilateral, authorizing fees either to plaintiffs or defendants; some are unilateral. Some depend on prevailing party status; some do not. Some may be unclear on these points. The rule adopted in Budinich ignores these distinctions in favor of an approach that looks solely to the character of the issue that remains open after the court has otherwise ruled on the merits of the case.

Ray Haluch Gravel.  Bottom line here is that this statutory-linkage portion of the Federal Circuit’s decision is junky and has already been effectively preempted by two prior Supreme Court decisions. In its decision, the Federal Circuit does not offer any other reason for tying enhanced damages to the final decision other than that it has done obliquely so in the past.