I’m going to link-in with Prof. Hricik on this case — it feels wrong to me to “settle” a lawsuit using a secret side-bet about how the court will decide a particular motion and then only reveal the settlement after the motion is decided. However, the court didn’t appear to blink its eye.

The Federal Circuit has not respected that mandate. Its “prevailing party” jurisprudence has diverged from most sister circuits in contradiction of Supreme Court law.

[En Banc Petition]. The particular legal issue here is if a patent infringement settlement agreement can create a “prevailing party” that could then result in an attorney fee award.

While this legal question is important, a big issue in the case for me is the cooperation between the parties to get the court to decide an issue after the case had been settled. 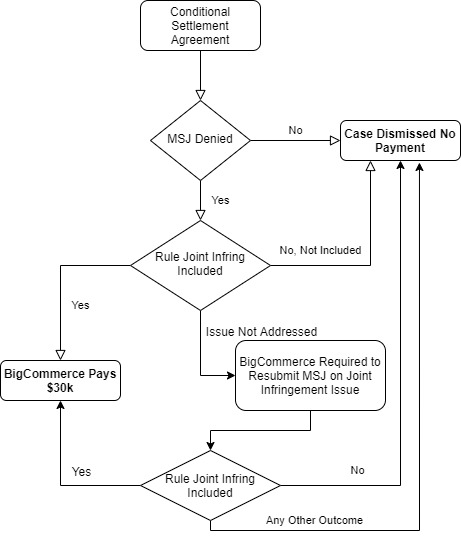 [Note – my flow chart is slightly simplified from the contract language].

]The following language comes from the settlement agreement:

MSJ Denied: If the MSJ is denied and the Court rules that Joint Infringement [was disclosed in the infringement contentions], then BigCommerce will pay Diem the sum of $30,000.00 (the “Payment”). . . .

Any Other Outcome: If any other outcome occurs, then Diem agrees to the following (collectively, a “BC-Favorable Resolution”): (i) Diem will walkaway and will not appeal or object to any order(s), (ii) the parties will allow the Court to determine the prevailing party and enter a final judgment, and (iii) if the case is not otherwise disposed, the parties will move to dismiss the action with prejudice (with clear language that BigCommerce did not pay Diem to settle this action).

Note here that the settlement agreement was not filed with the district court at that time — rather the parties waited for the court to rule on the summary judgment motion before telling the court that they had settled the case.

When it finally ruled on the motion, the district court granted summary judgment but did not address whether Diem had disclosed joint infringement in its original contentions — explaining that the theory was mooted by amended contentions and the court’s claim construction ruling.  After then being confronted with the settlement agreement, the Court (now a different judge) went ahead and decided the joint infringement disclosure question — holding that joint infringement was not disclosed in the original contention. The result then under the settlement: case-dismissed with no money being paid.

Prevailing Party: The defendant BigCommerce thought that it won — case was dismissed with prejudice in favor of the defendant — and consequently asked for prevailing-party attorney fees under Section 285.  The court quickly shot-down that request — holding that the case had no prevailing party because it was settled.

While the Court granted Defendants’ motion, resulting in BigCommerce not having to pay anything, this precise scenario was contemplated by the parties and accounted for in the Settlement Agreement. Thus, there is no “prevailing party.”

This decision fits to Federal Circuit precedent in Exigent Tech. v. Atrana Solutions, Inc., 442 F.3d 1301, 1312, (Fed. Cir. 2006) (“An award of [attorney fees] was not proper unless Atrana was a prevailing party. Atrana cannot be a prevailing party if the case was resolved by settlement (not incorporated by judicial decree) prior to any relief on the merits.”).  On appeal, the Federal Circuit affirmed the award in a R.36 judgment without opinion.  The major twist here as suggested by the en banc request is that the Supreme Court has – in other contexts – repeatedly held that a prevaling party can be determined based upon a settlement where the question is left for the court to decide. See Maher v. Gagne, 448 U.S. 122 (1980); Perdue v. Kenny A. ex rel. Winn, 559 U.S. 542 (2010)

9 thoughts on “Keeping Your Settlement Secret from the Court?”