In the UK, Geofabrics just won a judgment of infringement against Fiberweb for its European Patent No. 2 430 238.  The parallel U.S. Patent 8,978,995 has not yet been enforced.  I thought I would walk through the decision looking at how UK Judge Mr. David Stone handled issues and their parallel US comparison. 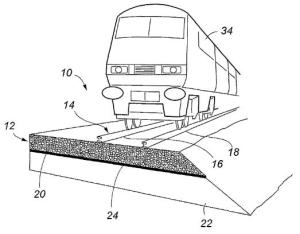 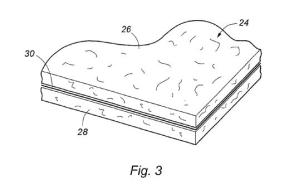 The defense offered several reasons for denying the infringement: lack of novelty, obviousness, and insufficiency of the claims and disclosure.

Novelty: The UK novelty law is substantially parallel to that of the U.S., although with a somewhat heightened enablement requirement. In a 1972 opinion, Lord Justice Sachs provided the following metaphor to the law of (land) discovery:

To anticipate the patentee’s claim the prior publication must contain clear and unmistakable directions to do what the patentee claims to have invented … A signpost, however clear, upon the road to the patentee’s invention will not suffice. The prior inventor must be clearly shown to have planted his flag at the precise destination before the patentees.

In the present case, the Judge Stone found that multi-layer fabric in the prior art lacked the precise permeability spectrum claimed in the invention.

(2) Identify the inventive concept of the claim in question or if that cannot readily be done, construe it;

(3) Identify what, if any, differences exist between the matter cited as forming part of the “state of the art” and the inventive concept of the claim or the claim as construed;

(4) Viewed without any knowledge of the alleged invention as claimed, do those differences constitute steps which would have been obvious to the person skilled in the art or do they require any degree of invention?”

Pozzoli SpA v BDMO SA [2007] EWCA Civ 558 (Jacob LJ).  The UK statute itself is simple asking is the invention “obvious to a person skilled in the art, having regard to any matter which forms part of the state of the art.” The Patents Act 1977 (as amended).  Note here that the UK statute limits obviousness analysis only to publicly-available prior art while secret prior art (such as prior filed applications) are available only for novelty analysis.

In his opinion, Judge Stone again sided with the patentee — finding that although the prior art addressed under-track erosion using a barrier — it’s solution was quite different in practice.

[I]t is by no means clear to me that a skilled addressee equipped with the CGK [Common General Knowledge] would:

In my judgment, the Patent is not obvious over Jay.

Insufficiency: The court examined three defenses under the umbrella of “insufficiency”: Uncertainty (sometimes called ambiguity); Classical insufficiency/lack of enablement; and Lack of plausibility.  The statute provides that the specification must “disclose the invention clearly enough and completely enough for it to be performed by a [skilled addressee]”.  72(1)(c) of the Patents Act 1977.

Insufficiency – Uncertainty is basically the same as claim indefiniteness in the U.S. — requiring undue effort to understand the scope of the claims. Here, the court found that the claim requirement of being “normally impermeable” was not unduly uncertain.

Classical Insufficiency is parallel to enablement in US law — the specification must enable a person killed in the art to perform the invention without undue burden.  Here, the court found that some testing was necessary to create the claimed permeability profile, but that testing was “not unduly burdensome.”

Insufficiency – Plausibility: In the UK, the plausibility doctrine has some flavors of US utility doctrine.  Normally, plausibility will be assumed. However, courts have raised suspicion in situations where an inventor could easily file many patents based upon pure speculation of success.  One example of this might be a new medical use of a known drug (“second medical use claim”).  In that situation, the UK Courts require “some disclosure as to how or why the known product can be expected to work in the new application.”  In rejecting this defense, the court noted that a patent for a new product (as here) is “almost always” plausible.

Infringement: The court found infringement both literally and as equivalence.  For equivalence – the court applies a result-way test: “Substantially the same result in substantially the same way.” Actavis UK Ltd v Eli Lilly and Co [2017] UKSC 48 (Lord Kitchin JSC). Equivalence can be negated based upon evidence that patentee “intended that strict compliance with the literal meaning . . . was an essential requirement of the invention.” Id.  In this case, the question of what “normally” impermeable meant. The court found that the accused product fit that term or was at least the equivalent.  The basic argument on the other side was that the layer might be permeable under the weight of flood-water and in some parts of the UK floods regularly occur.

In the end, the court upheld the patent and found it infringed. The next steps in the case will be to consider remedies. The patentee has requested damages as well as injunctive relief.