I used to play golf fairly regularly and got into the habit of announcing “BOOM!” on every drive.  It didn’t help my game.  BOOM!’s great name here also didn’t save its patent from dancing the Alice Two Step. (Note: I was 15 years old at the time–on my high-school freshman team getting free-rounds for the season).

This case is another affirmance of a dismissal for lack of patent eligibility. Under Alice/Mayo, the Supreme Court’s patent eligibility analysis is a two step process.  At Step 1, the court asks whether the claims at issue are “directed to” a patent-ineligible concept, such as an abstract idea. Claims that fail Step 1 can be saved by Step 2, looks for “something more” beyond the ineligible concept sufficient to transform the claim’s nature into a patent eligible invention.

The claims at issue here are somewhat similar to the exchange-settlement process found ineligible in Alice. In particular, Boom’s patents all claim “methods for confirming that a transaction has been consummated prior to releasing electronic payment.”  U.S. Patents 8,429,084; 9,235,857; and 10,346,840. The ‘840 patent issued June 2019 and so the PTO should have gotten this one right.  The examiner initially rejected claims 1 as ineligible (then listed as claim 21).  The patentee made several minor “clarifying amendments” and the examiner then allowed the case.  In its reasons for allowance, the examiner wrote the following:

The claims as amended have been analyzed under 35 U.S.C.101, and although directed at some level to an abstract idea, confirming that a proposed sale transaction has been consummated, the claims as currently amended are found to integrate the abstract idea into a practical application sufficiently that they are patent-eligible under §101.  They do not amount merely to having a computer apply an abstract idea, or using communication between computers to carry out a commercial interaction that could plausibly be done without computers or telecommunication (“could not plausibly be done” does not require that there be no conceivable parallel without computers or telecommunication).

This is basically a passcode system or checksum.

In its decision, the district court found the claims directed to the abstract idea of authenticating sales through the use of a third-party intermediary, and without any sufficient additional inventive concept.  On appeal, the Federal Circuit affirmed:

Boom argues that the claims are not directed to an abstract idea, but rather to a technological improvement over prior art systems for confirming and processing online payments. Specifically, Boom argues that the elements of the claims provide specific steps for processing an online payment, and therefore are not directed to the general concept of escrow. . . .

We agree with Stripe that the claims are directed to the abstract idea of payment escrow. They only describe steps of passing information back and forth by a computer. The very purpose of the patents, as explained in the written description, is verifying consummation of a transaction before releasing payment by a third party, which is the definition of escrow. . . . Indeed, the claims are reminiscent of those at issue in Alice.

The patentee also disputed whether the case was properly dismissed at the pleading stage. Although eligibility is a question of law, some aspects of the determination may require a fact-finder to consider evidence (and thus creating a genuine issue of material fact that precludes dismissal on the pleadings). Here, the patentee particularly amended its complaint to allege that the claimed invention was not routine or conventional at the time of the invention. On appeal, the Federal Circuit disregarded those statements as conclusory because they were not supported by particularly “plausible factual allegations.”

Drilling-in on this, the complaint makes the following allegations:

The particularized manner in which the ‘transaction specific buyer acceptance identifier’ and ‘transaction consummation completion identifier’ of the claims of the Asserted Patents are generated, stored, used, and related to other identifiers was not well-understood, routine, or conventional at the time of Mr. Bogaard’s inventions.

The Federal Circuit identifies the assertion here as conclusory and thus gives it no weight in determining whether the complaint generates disputed material facts.  This is a bit odd since we’re asking the patentee to prove a negative, but perhaps the patentee could have cited to the reasons-for-allowance within the complaint itself or submitted an affidavit from an expert on-point as an attachment to the complaint.  At that point though we’re getting pretty far from the “short and plain statement of the claim” required by Fed. R. Civ. Pro. 8. 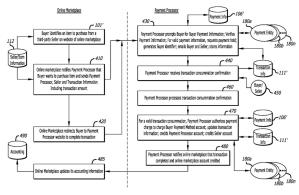 28 thoughts on “Boom! You Can’t Patent an Escrow Method”