A jury sided with the patentee Bayer — finding the patent infringed and not proven invalid.  The judge refused to allow the jury to decide willfulness, and instead found no willful infringement as a matter of law. Affirmed here on appeal. 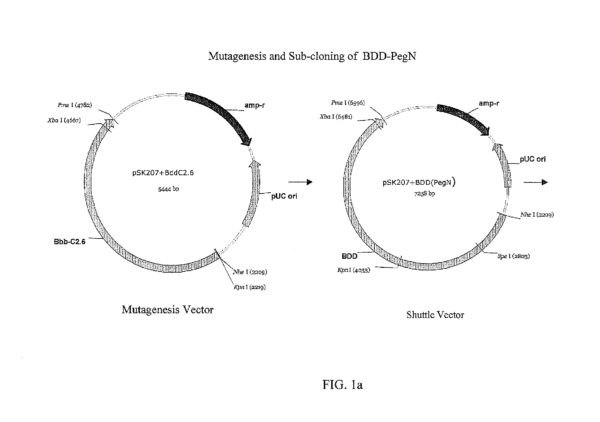 The basic setup: Bayer’s U.S. Patent No. 9,364,520 covers a conjugate that includes a “functional Factor VIII polypeptide” having a particular amino acid sequence (“or an allelic variant thereof”).  Factor VIII is normally produced by the human liver and is important to blood coagulation.  Thus, Factor VIII is also a helpful treatment for hemophilia A.  The conjugate also includes polyethylene glycol (PEG) that is used as a preservative and has a particular binding site on the polypeptide (“the B-domain”).  The process of joining the two factors together is known as PEGylation.  The B-domain binding site limitation was important because prior researchers had found that non-specific conjugation changed the Factor VIII in a way that reduced or eliminated its functionality.

First the damages: After finding infringement, the Jury was asked to determine a royalty rate (17.18%); a royalty base ($872 million); and then do the math for the damages ($155 million).  The district court also added another $18 million for pre-verdict supplemental damages.  The verdict here is based upon Baxalta’s distribution of Adynovate, a PEGylated FVIII hemophilia treatment.

I have included a snippet from the verdict below.

At trial, Bayer’s damages expert, Dr. Addanki, testified that the royalty rate range should be 5.1% to 42.4%. On appeal, the defendant argued that this range was simply too wide and effectively required the jury to speculate — or just pick a number, any number (within the wide range).   On appeal, the Federal Circuit found no problem and that the evidence presented supported the verdict. “[W]e are aware of no precedent that requires an expert to provide a single proposed royalty rate.”  I wonder if next-time Dr. Addanki will push his luck and go for a 0-100% predicted range. I’m confident that it is accurate if not precise.

RANDOM: Construing the Claim Construction.  The district court construed the claimed polypeptide conjugation as “not random” based upon statements in the patent and the prosecution history.  On appeal, the defendant argued that the term random – although not found in the claims – should have been construed by the district court.

On appeal, the Federal Circuit found no error — explaining that claim construction need not “purge every shred of ambiguity.” quoting Acumed LLC v. Stryker Corp., 483 F.3d 800 (Fed. Cir. 2007).  Here, the defendant had asked for a particular narrow construction and the district court had refused — finding it too narrow.

Talk about functional claim language: The claims expressly require that the conjugate be “functional.”  Still, the jury found the claims enabled. On appeal, the Federal Circuit affirmed — noting the substantial evidence presented by the patentee at trial.  Further, “the specification need not include a working example of every possible embodiment to enable the full scope of the claims.”

The patentee had cross-appealed on willfulness. The patentee presented evidence that the defendant knew about the patent and knew that its drug used the same targeted PEGylation at the B-Domain as claimed.

On appeal though the Federal Circuit agreed with the district court that this evidence was not enough to make a case of willfulness. “Knowledge of the asserted patent and evidence of infringement is necessary, but not sufficient, for a finding of willfulness. Rather, willfulness requires deliberate or intentional infringement.”