This claim construction decision focuses on prosecution disclaimer.  During prosecution, the patentee amended its claims and made statements distinguishing their claimed invention from the prior art.  Those actions created a disclaimer — meaning that the claim limitation cannot be interpreted to cover what was found in that distinguished reference.

SpeedTrack’s U.S. Patent No. 5,544,360 covers a three-step method of searching-by-category.

The patent document explains the benefits of this system: It avoids the problem of typos in searches; and avoids the time-waste of searching for data that cannot be matched.  OK – it is surprising to me that there is not clear prior art, even though the application has a 1985 priority filing date.

The infringement lawsuit was filed back in 2009 in N.D.Cal. In 2010, Judge White stayed the lawsuit pending outcome a parallel lawsuit against Wal-Mart and an ex parte reexamination of the patent at issue.  The reexamination concluded in 2011 — confirming the patentability of the above claim (as well as others); the Wal-Mart action ended with non-infringement finding. And, another parallel action against Home Depot also ended with a finding that the “Kessler doctrine precludes SpeedTrack’s infringement claims.”  At that point, Judge White picked up this case again and started working through the remaining issues.

Claim Construction: The focal point of claim construction was the negative claim limitation prohibiting a preexisting hierarchical relationship between the various categories: “the category descriptions having no predefined hierarchical relationship.”  Claim 1.  The accused systems all include some genus-species or field-value relationships within their categories.  Here, a field-and-value is something like “Language-and-French.”  The district court held that these genus-species relationships were prohibited under the no-preexisting hierarchy limitation because of prosecution disclaimer.

Interpretive Construction versus Disclaimer: The entire prosecution history is relevant to determining the meaning of the various claim limitations. As the Supreme Court wrote in Graham v. John Deere Co., 383 U.S. 1 (1966), “an invention is construed not only in light of the  laims, but also with reference to the file wrapper or prosecution history in the Patent Office.” See also Crawford v. Heysinger, 123 U.S. 589, 602 (1887) (“file-wrapper and contents in the matter of the reissue are part of the evidence in the case, and throw light upon what should be the proper construction of claims 1 and 2.”).  In extreme cases, the prosecution history serves as a disclaimer effectively showing abandonment of claim scope.  Disclaimer only applies when the patentee acts to disavow claim scope in a way that is “both clear and unmistakable to one of ordinary skill in the art.” Elbex Video, Ltd. v. Sensormatic Elecs. Corp., 508 F.3d 1366 (Fed. Cir. 2007); Vita-Mix Corp. v. Basic Holding, Inc., 581 F.3d 1317 (Fed. Cir. 2009).

Often Implicit: Sometimes patent applicants expressly state that they are disclaiming scope. But most of the time the disclaimer is impliedly understood by the patentee’s statements and actions.  We typically look toward statements in the prosecution history and amendments made to the claims, either of which can create disclaimer.

In SpeedTrack, the hierarchical limitation had been added during prosecution to distinguish the invention from a prior art patent that included a field-and-value hierarchy. (Snippet below). 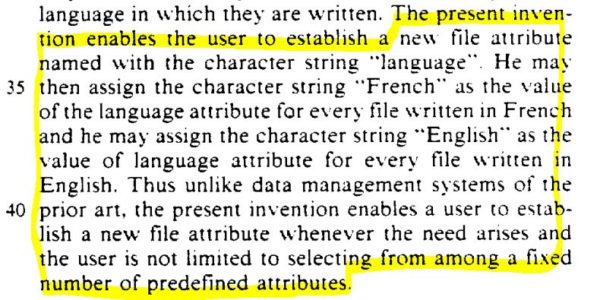 On appeal, SpeedTrack argued that the prior art’s use of field-and-value was not a hierarchy and so not captured by the claim limitation.  The problem though is that (1) the patentee had, during patent prosecution, added the limitation specifically to avoid the prior art reference and (2) had particularly distinguished the prior art reference as requiring a “2-part hierarchical relationship between fields or attributes, and associated values for such fields or attributes.”

In the end we have classic disclaimer: amendment to avoid prior art + statements explaining aspect of the prior art being avoided by the amendment. SpeedTrack admitted that there would be no infringement on this construction.  As such, the prior judgment of non-infringement was affirmed.

As discussed above, the doctrine of prosecution disclaimer is a rule of claim construction that then applies to limit the literal claim scope.   The courts have separately ruled on the prosecution history estoppel that similarly limits patentees ability to expand the literal scope to cover equivalents.  I would argue that the doctrine of equivalents could not be used to recover scope disavowed by disclaimer (even absent a narrowing amendment).

In addition, although I termed the doctrine “classic disclaimer” it was only in 2003 that the Federal Circuit first used the phrase “doctrine of prosecution disclaimer” — writing that the doctrine “is well established in Supreme Court precedent, precluding patentees from recapturing through claim interpretation specific meanings disclaimed during prosecution.” Omega Engr., Inc, v. Raytek Corp., 334 F.3d 1314 (Fed. Cir. 2003).  It was in Omega that the court also made clear that any disavowal be “clear and unmistakable.”  Truthfully, at this point the Supreme Court precedent  was not (and is not) entirely clear and unmistakable.

Some older cases on point: