We have snow on the ground here in Missouri. That makes me think of Gary Reinert’s new patent entitled “method and apparatus for rapid stopping of a motor vehicle particularly on snow or ice.” U.S. Pat. No. 11,091,154.  The image below from the patent tells the story.  Conventional brakes are awful. Antilock Brakes are much better, but the Reinert Snow Brakes take the cake.  Rather than just stopping the wheels, the Reinert Snow Brakes actually shift the car into reverse and spin the tires backward to slow-down the car.  I feel like I saw this in Cannonball Run II, but I’m probably misremembering. 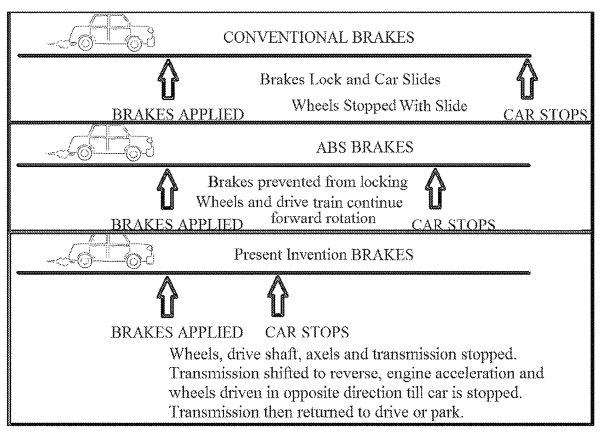 A method for emergency stopping of a motor vehicle comprising the steps of:

activating the emergency stopping of the motor vehicle;

stopping the forward rotation of each wheel immediately following the activation of the emergency stopping of the motor vehicle;

rotating each driven wheel in the reverse rotation direction until the vehicle is stopped;

wherein the step of activating the transmission includes using sensors on each ground engaging wheel.

The examiner found several on-point references, including US5492512A – Brake system with wheel-reversing means for an automobile (Wu). Reinert distinguished those references by requiring a particular shifting through “neutral park position” before heading to reverse, and also requiring sensors on the wheels that are used to activate the emergency stop. 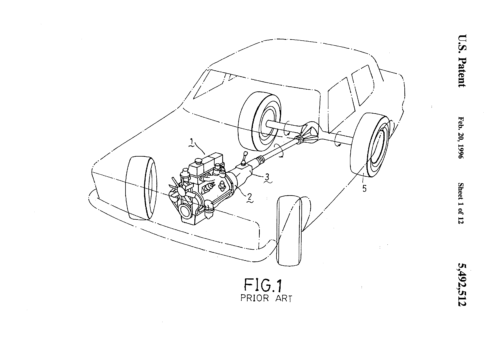