In our new paper, The Truth About Design Patents, we debunk three widely held—but incorrect—views about U.S. design patents. Taken together, these myths paint a grim picture of design patents:

By this account, design patents are hard to get, hard to defend even if you do get them, and hard to recover on even if you do get and defend them. These beliefs are commonplace in the literature and often invoked without citation. But, when we traced these assertions back, we found an origin story of weak support and misunderstood data.

In our paper, we provide more current, transparent statistics to replace each myth that we debunk. However, we strongly caution against over-interpreting our findings.

Where do these myths come from?

The origins of these claims lie in three old and misunderstood sources: a 1985 study by Thomas Lindgren, a 1979 study by the USPTO, and a 1953 study by Raymond Walter. The Lindgren study contributed to all three claims, whereas the USPTO and Walter studies contributed mainly to the second claim—regarding frequent invalidation during litigation.

We also found other problems with these studies. For example, Lindgren noted in his article that his sample size was too small to draw statistically significant conclusions. But his data was cited by others, in citation networks we trace in much more detail in the paper, as if it were statistically significant. Moreover, a 1999 paper mis-cited Lindgren for a claim that the 1985 study didn’t actually make, and that mistake is what hardened into the first piece of conventional wisdom noted above: that half of all design patent applications are rejected.

Recognizing the best way to fight bad data is with better data, we also offer corrections and updates to the record. The following findings about the current state of affairs follow the same sequence: acquiring design patents, defending them, and enforcing them.

For nearly the last quarter-century, the success rate of design patent applications seems to have been over 85%, not the 50% that Frenkel reported in 1999. (We note that our findings are consistent with what Professor Crouch found in his 2010 study of design patent examination.) 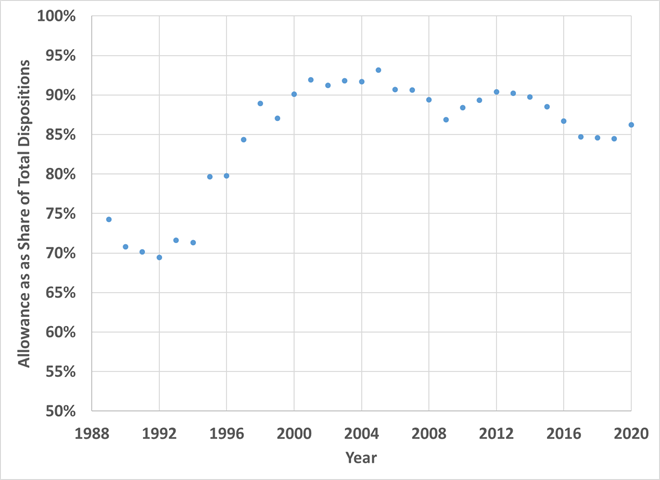 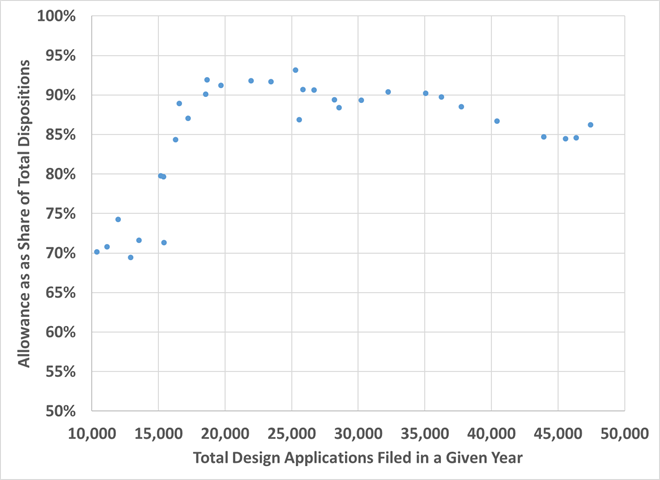 Our source is the USPTO’s own annual reports going back to 1989, the oldest data that is readily available. This data shows that, since 1989, the apparent grant rate for design patents has stayed at or above some 70%—whereas the volume of design patent filings has quadrupled over the same period. By the mid-1990s, that rate was nearly 80%.

We also looked at design patent outcomes in the International Trade Commission and the UPSTO Patent Trial and Appeal Board. There were fewer cases in these tribunals, but the data we found paints a picture that is far from grim.

For the period of 2011–2020, ITC determinations about validity upheld the patent 95% of the time and invalidated only 5%. Given the relatively small population of ITC design patent cases, we caution against strong conclusions about strategic behavior across tribunals as is often seen with utility patents. Still, the available data does suggest that the ITC is not invalidating two-thirds of the design patents asserted there.

Meanwhile, from when PTAB trial proceedings came online in 2012 through 2020, the survival rate of design patents in these administrative trials has been 79%, reflecting a survival rate of 78% among IPR cases and of 81% among PGR cases. We refer to an overall survival rate because patents can survive (1) when petitions challenging them are never instituted—i.e., taken up for review by the PTAB—as well as (2) when they are evaluated on the merits and are found not invalid. The overall PTAB survival rate we report accounts for both.

Finally, our research did not support the assertion that most litigated design patents are found not infringed: 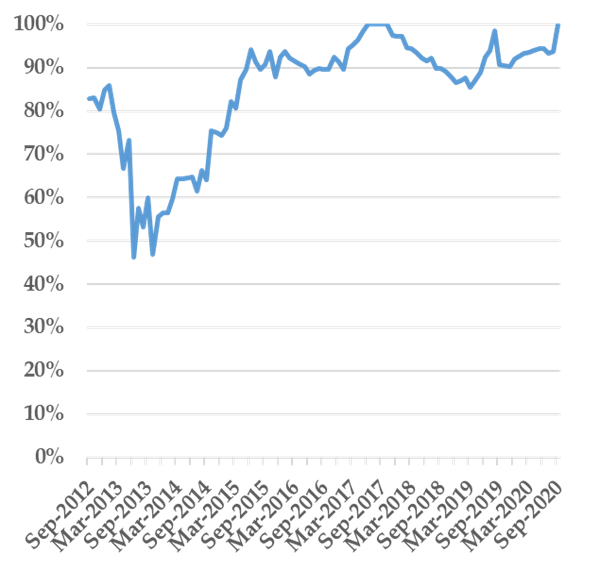 Again, we caution against over-interpretation of these findings. Our aim is to correct the record and reorient a conventional wisdom that rests on an inaccurate and incomplete statistical picture. Thus, we are acutely mindful of the risk in replacing one mistaken view with another.

A number of people have called for changes to the design patent system, relying frequently on the myths that we have now debunked. We hope that our paper will bring more light to these debates and, at a minimum, encourage more fact-based discussion on these important policy issues. We also call for more empirical research and for more transparency of data in this area. For example, we see no good reason for the USPTO not to publish all design patent applications. We know that the USPTO is bound by current law, and we call on Congress to reconsider that policy and to stop exempting design patents from the general publication requirements of 35 U.S.C. § 122.

Reasonable minds might differ over whether 18 months is the right time for publication as is the case for utility patents, but there is no good reason—at least none we’ve yet heard—to keep them secret forever (unless granted). Publishing these applications would not only provide more data for research and policy analysis but would also provide transparency on the issue of how the USPTO handles applications for this increasingly important category of patents.

Editors Note: We require disclosure of conflicts-of-interest for guest posts, including both financial interest and representation of interested parties.  One of the authors (Vishnubhakat) indicated an attenuated potential financial conflict in that he owns stocks in a number of companies, including some tech companies that hold utility and/or design patents.