The USPTO refused to register Glascoe’s mark SCIENTIFIC STUDY OF GOD for use as a service mark when “analyzing the process of creating a human being, the earth, the universe and its environment.” I know what you are thinking–deceptively misdescriptive.  The TTAB did not go there, but instead refused registration after concluding that the mark was “merely descriptive.”

“A term is merely descriptive if it immediately conveys knowledge of a quality, feature, function, or characteristic of the goods or services with which it is used.” In re Bayer Aktiengesellschaft, 488 F.3d 960, 963 (Fed. Cir. 2007)

Here. Glascoe’s purported services are related to the scientific study of god, which is the exact mark that is being claimed.  Glascoe appealed pro se. Her brief begins:

Pro Se Appellant DEIRDRE C. GLASCOE is an Extra-Terrestrial Life Form—The Alien Entity known As GOD. GOD Is A Brand Name®, as are “I AM,” “YHWH,”  “Yahweh,” “Jesus Christ™”, “Allah”, “Lord GOD of Israel,” “EL”, “Human Beings.” GOD’s Kingdom is a foreign state within the meaning of the Foreign Sovereign Immunities Act.

GlascoeBrief.  As you might guess from this excerpt, I did not find anything within Glascoe’s briefing that suggests ‘scientific study’ in a form that I would recognize. That makes me think that the misdescriptive refusal might be more appropriate.  For its part, the Federal Circuit provided a one sentence summary denial:  “Ms. Glascoe has failed to make any cogent, non-frivolous argument as to why the Board’s determinations were incorrect.”  In briefing, Glascoe noted that the TTAB had erred by failing “to recognize GOD as a legal person.”  On appeal, the Federal Circuit did not address that issue.

One thing that Glascoe does is use Anagrams as decoding keys to understand underlying meaning. I’ve provided a couple of examples from the briefing. 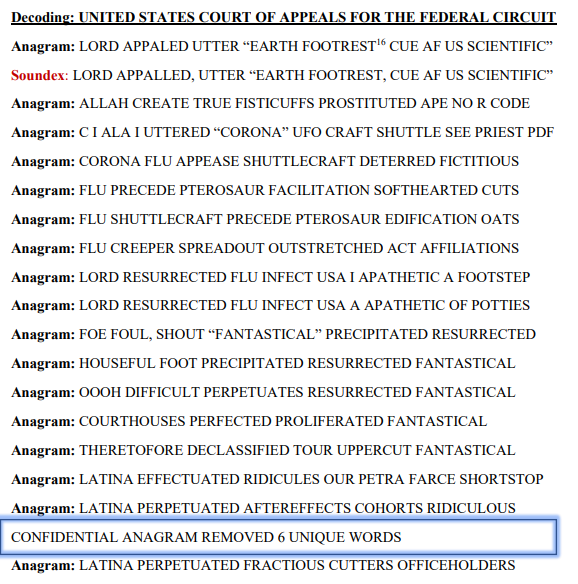 23 thoughts on “SCIENTIFIC STUDY OF GOD”