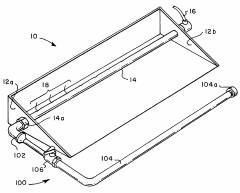 In an infringement action over a patented fireplace burner assembly, the district court, after a bench trial, found for the plaintiff patent holder. (U.S. Patent 5,988,159). A Federal Circuit panel vacated the infringement holding:

Additionally, the appellate court upheld a finding of validity. (Apparently, bald conclusions of validity satisfy Rule 52(a) because of the accompanied presumption of validity). Finally, the court refused to hear an inequitable conduct charge that had not been raised below.