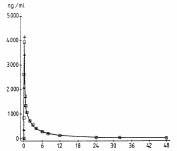 Novartis patented a cyclosporin hydrosol (aqueous solution) and sued Eon for infringement. (U.S. Patent 5,389,382) Eon’s cyclosporin, however, is suspended in ethanol rather than water. The infringement argument was that a Eon’s drug formed a hydrosol when ingested by a patient.

The court held that “hydrosol” as used in the patent is limited to an “aqueous medicinal preparations prepared outside the body,” and thus, that Eon’s formulation did not infrnge.