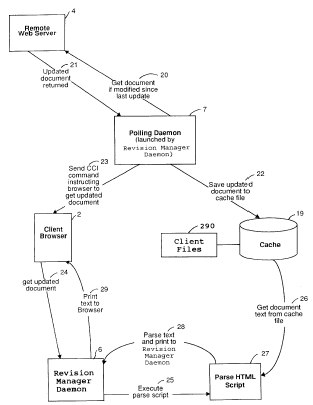 District court has no power to redraft claim language to change its ordinary meaning.

In the Summer of 2002, Teknowledge sued Akami, Inktomi, Yahoo, Microsoft, and Netscape for infringement of its patent involving “automatic retrieval of changed files by a network software agent”. (US6029175). As part of the litigation, Yahoo and Inktomi filed for summary judgment of invalidity of some claims.

In order to avoid summary judgment of invalidity for claim 29, Teknowledge argued that a typographical error existed in the patent, and that the court should redraft the claim based on the intended meaning. Judge Illston disagreed, citing the “clear line of Federal Circuit authority” that bars district courts from re-drafting claims to change their ordinary meaning, “even if the ordinary meaning produces a nonsensical result. (citing Chef America). Because the ordinary meaning produced a nonsensical result, the Court found the claim invalid.

Citing the ongoing litigation, Yahoo’s attorney had no comment.