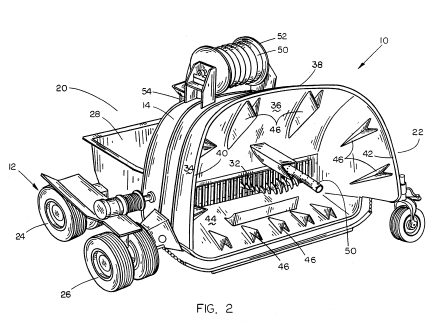 Versa owns a patent on an apparatus for creating air channels in bagged compost materials. The air channels allow for decomposition of the material.

Versa filed suit against Ag-Bag for patent infringement.  However, in the wake of an adverse Markman hearing, Versa admitted that it could not prove infringement based on the district court’s claim construction. After filing the appeals, the parties entered into a settlement agreement that resolved all issues on appeal other than the proper construction of the “means . . . for creating air channels” limitation. The parties have also agreed that, if we conclude the flutes are required, Ag-Bag will pay Versa an agreed royalty. Thus, the sole question before us is whether under a proper claim construction the claimed bagging machines must include flutes.

The Federal Circuit found that the means-plus-function claim language did not require flutes.

Accordingly, since we hold that flutes are not required structure, the judgment of non-infringement based on the district court’s incorrect claim construction is REVERSED.

This case does not present a new question, and it should not have a new answer. The question is, can a patent claim clause written in means-plus-function form be construed, as a matter of law, literally to cover a device that is not the invention described in the specification, that is not shown in any of the drawings, that was not examined for patentability, that was excluded by prosecution arguments, and that is not an asserted equivalent. Statute and precedent require that the question be answered in the negative. Until today.