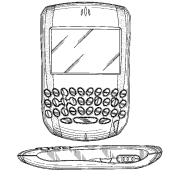 In this highly anticipated patent case, the Federal Circuit has vacated the district court’s judgment and injunction.

Accordingly, the judgment and the injunction are vacated, and the case is remanded to the district court for further proceedings consistent with this opinion. We affirm the district court’s judgment in all other respects. We thus affirm-in-part, vacate-in-part, and remand.

HOWEVER, RIM’s win is marginal at best — NTP remains in a strong position as the case returns to the district court.  The decision is remanded for the district court to determine what portion, if any, of the jury verdict should be set aside, based on the prejudicial effect of the court’s misconstruction of a single claim term.

Specifically, the Appeals Court only questioned the infringement decision on five of NTP’s patent claims.  Presumably, the verdict of infringement on the other eleven claims is upheld.

NTP’s patents are directed toward an "electronic mail system with RF communications to mobile processors." (e.g., U.S. Patent No. 5,436,960). NTP sued RIM, maker of the BlackBerry for patent infringement.

The district court “construed the disputed terms according to their plain and ordinary meaning, as supported by the specification and prosecution history.”  Based on the claim construction, the district court granted summary judgment to NTP on several patent claims — finding that the BlackBerry infringed some of the claims.  The remaining claims were decided by the jury.

On every issue presented, the jury found in favor of the plaintiff, NTP. The jury found direct, induced, and contributory infringement by RIM on all asserted claims of the patents-in-suit. The jury also found that the infringement was willful. It rejected every defense proposed by RIM. Adopting a reasonable royalty rate of 5.7%, the jury awarded damages to NTP in the amount of approximately $23 million.

The court awarded monetary damages totalling more than $53 million, with the following approximate division: (1) compensatory damages of $33 million; (2) attorneys’ fees of $4 million; (3) pre-judgment interest of $2 million; and (4) enhanced damages of $14 million. The court also entered a permanent injunction against RIM, enjoining it from further manufacture, use, importation, and/or sale of all accused BlackBerry systems, software, and handhelds.

The Court of Appeals for the Federal Circuit reviewed the claims construction de novo, taking an ordinary meaning approach: "In the absence of an express intent to impart a novel meaning to the claim terms, the words take on the full breadth of the ordinary and customary meanings attributed to them by those of ordinary skill in the art," using the written description as examined through the viewing glass of a person skilled in the art to give context to the claim language.

The CAFC agreed with the RIM on only one point:

On all other points, the CAFC affirmed the district court ruling, these include (i) construction of all other terms; (ii) a decision that RIM’s Canadian server location does not prevent application of U.S. Patent Laws to the e-mail system; (iii) Denial of RIM’s motion for JMOL; and (iv) exclusion of RIM’s expert and demonstrative testimony.

RIMM won the appeal on a sliver of an argument, but is still in a position to lose the case.

The CAFC reversal of the claim construction of the District Court does not affect all of the asserted and infringed claims. According to the opinion ‘some’ of the claims are definitely infringed on. However, it was remanded because the jury did not outline how much royalties apply to each infringed claim. The CAFC only reversed the claim construction of "originating processor" found in some claims and not of the comparable "originating device" found in the other claims. The District Court had construed these terms them separately and RIM only appealed "originating processor" and not "originating device". So I guess it can be said the NTP won a "Judgement-in-Part."

A Tom Kirby, a Patently-O Reader, answers my question:

Vacating an judgment often does not imply disapproval, but merely clears the deck for further action by a lower court.  The U.S. Supreme Court has an established practice known as GVR.  When it decides a case there may be several other arguably similar cases in the pipeline from the Court of Appeals.  The Supreme Court will (i) Grant review of the case, (ii) Vacate the decision below, and (iii) Remand for reconsideration in light of the recent decision.  Very often the Courts of Appeals conclude that little or nothing needs to be changed and simply reinstate their previous ruling.

Today, this case is important because of the millions of BlackBerry users in the U.S.  However, the doctrinal significance of this case will be the Federal Circuit’s stance on the inclusion of foreign components in the infringement analysis.

Under the Patent Act [35 U.S.C. 271(a)], patent rights are limited by the territory of the United States.  However, in this case, the court found that plain language of section 271(a) does not preclude infringement where a system such as RIM’s, alleged to infringe a system or method claim, is used within the United States even though a component of that system is physically located outside the United States."

This liberal interpretation of the territoriality restrictions of the Patent Act bodes well for Eolas in the recently heard Microsoft v. Eolas appeal.