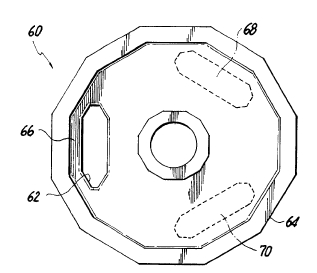 Iron Grip is the assignee to U.S. Patent No. 6,436,015, which covers a weight plate with a triad of dispersed grip locations.  USA makes allegedly infringing plates.  The district court granted USA’s motion for summary judgment that the patent was obvious, finding that “it would have been obvious to a layman to combine the prior art.”  On appeal, the Federal Circuit affirmed:

Because the claimed invention falls within a range disclosed in the prior art, and the patentee has not shown that the prior art taught away from the invention or new and unexpected results from a three elongated grip weight plate as compared to those in the prior art, we conclude that the claims are obvious absent substantial evidence of pertinent secondary factors supporting patentability.

Barbell companies have been getting rejected at the trademark side of the PTO as well.  John Welch filled me in on the recent case of in re Ivanko Barbell Company (not precedent). 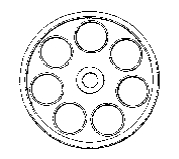 In Ivanko, the TTAB refused to register the weight plate design (shown above) for two reasons: (i) functionality and, in the alternative, (ii) failure to establish distinctiveness.  The applicant had essentially admitted functionality — that is a bad move at the TTAB or when applying for a design patent.

As required by the statute, we must consider whether applicant’s design as a whole is functional. 15 U.S.C. § 1052(2)(5). Here, the evidence supports the examining attorney’s position that the design is de jure functional. Applicant touts the utilitarian advantages of safety and ease of handling of its design.

The Board noted that, because the designs are functional, any evidence of distinctiveness is moot.  However, for the sake of completeness, the board discussed the applicant’s contention that its designs had acquired secondary meaning.  The applicant had presented survey information in an attempt to show secondary meaning associated with the 7-hole weight plate:

Applicant has the burden of proving that its mark has acquired distinctiveness. . . . Of the survey respondents who were familiar with the Ivanko barbell weigh weight [sic] plate in question with all indicia removed (Picture A-1), 58.65% associated the appearance of the barbell weight plate shown with Ivanko and an additional 8.65% associate it [with] one company.”

However, the majority of survey participants were upper level employees in the barbell business, and thus, the court could not tell whether potential consumers have assigned any secondary meaning to the designs.