Over eighty percent of utility patent applications are initially rejected during prosecution. Some areas of technology – such as semiconductors – have a lower rejection rate while others – such as electronic commerce methods – have an even higher rejection rate.

I wanted to compare the result for utility patents with design patents. I pulled up information on 1000 of the most recently issued design patents (all issued in March, 2009) and parsed through the file histories to see how design patent prosecution compares. As the graph below shows, in my sample, only 25.6% of the recently issued patents received an initial rejection during prosecution. To be clear, this 25% rejection rate is for applications that eventually issue as patents. To get an overall picture of design patent rejections, we need to also consider the applications that are abandoned and never issue as patents. Recent PTO statistics show that a bit under 20% of design patent applications are abandoned. Because design patent file histories are kept secret unless a patent issues, we cannot know why any individual case is abandoned – However, the two most likely situations are that the applicant (a) failed to respond to a rejection or (b) failed to pay the issue fee. Even if we assume that 100% of the abandoned cases are initially rejected, that only pushes the initial rejection rate to about 40%.

As the graph below shows, of the 1000 issued design patents in my sample, only 4.1% received a final rejection during prosecution; and only 0.2% cases (2 out of 1000) included a notice of appeal. None of the 1000 cases included an appeal brief. 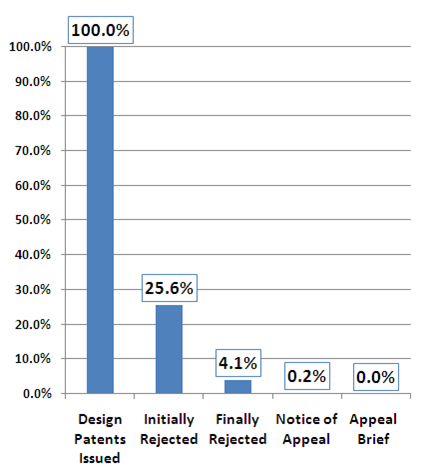 The design patents in the study had an average pendency of 15.3 months calculated by finding the number of months between the filing date and the issue date. As may be expected, applications that included at least one rejection took considerably longer to issue (21.5 months) as compared to those that were never rejected (13.2 months). (These means are different at 99.9 CI). 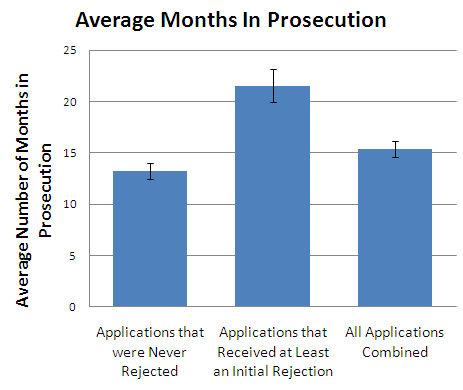 26 thoughts on “Design Patents: Sailing Through the PTO”