This relates to my statements regarding the percentage of applications that receive at least an initial rejection. The graph below shows the percentage of patents issued (2000-2006) that were initially rejected by the PTO broken up into groups of art-units. Thus AU 1630 group actually includes AU 1630 – 1639. Close to 95% of the patents issued through the AU 1630 group during that period were initially rejected before being eventually allowed. 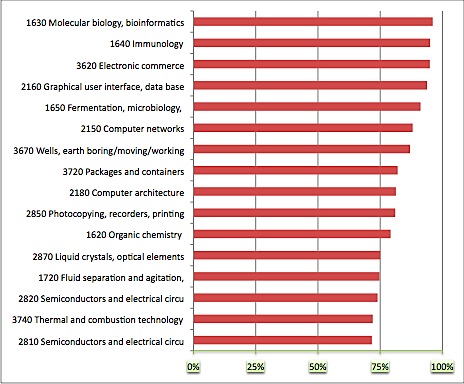 This data is now getting a bit old – but it is what it is. This data came from public PAIR before researchers were blocked from accessing it in any substantial way. Since 2006, applicants have complained of increased rejections. My perception that this change is not a shift toward more first office action rejections, but rather a shift toward sustaining more of those rejections in the second and subsequent office actions.

40 thoughts on “Percentage of Patents that were Initially Rejected”