Earlier this week, the USPTO issued a design patent to Google that covers the “ornamental design for a graphical user interface [GUI] … as shown and described.” Pat. No. D. 599,372. Design patent coverage is essentially defined by the images include in the issued patent. Here, the image looks roughly the same as the company’s ubiquitous Google.com homepage. (See image below.)

To be clear, many patent professionals would argue that it is misleading to ever simply call this “a patent.” Rather, it is a design patent. Design patents have limited scope in that they only cover ornamental designs rather than technological advances. The USPTO has been granting design patent protection for screen shots and icons for many years. However, to my (limited) knowledge, none of those design patents have ever been enforced in court. As with most design patents, it appears that during prosecution, the PTO never issued a substantive rejection based on novelty or obviousness. [UPDATE – I updated this paragraph based on messages from two of the leading design patent experts Saidman and Carani who rightly indicated that in the past several years, few design patents have been found invalid] 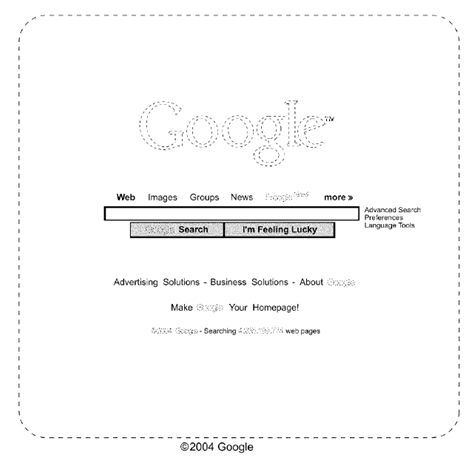 Dashed or “ghost” lines in the drawing indicate features that are not claimed. Thus, patent would be infringed by someone using an identical layout even if they replaced the “Google” mark with their own mark. You can note at the bottom that the design patent drawing is marked with a circle-c ©. That indicates that Google is also claiming copyright protection for this layout. In addition, in the design patent, Google indicates that it is also claiming trademark protection for portions of the layout and – perhaps – for the layout as a whole.

Although there is some conflict in the precedent, modern courts have generally allowed companies to overlap design patent, copyright, and trademark protection in the same way that a prosecutor may charge someone with multiple crimes that all stem from the same bad act. This only becomes a problem when applicants also attempt to include utility patent protection in the mix. The problem arises because inventions protected by utility patents are required to be “functional” while design patent, copyright, and trademark laws only protect “non-functional” elements. [The non-functionality doctrine varies considerably between the regimes.]

I like to think of the three regimes (design patent, copyright, and trademark) as essentially creating different rules of evidence to prove the same thing. All of the regimes have some sort of distinctiveness doctrine. For design patents, the design must be a novel and nonobvious advance; for trademark, the mark must help distinguish goods or services in the minds of consumers; for copyright, the work must be original. Likewise the elements of infringement are similar, but different enough to provide added value to someone concerned with protecting an underlying valuable asset.

Allowing overlapping protection has problems. Most notably, the ‘piling on’ effect may make it too expensive to challenge Google’s rights even if their claim to rights appears overreaching. In the criminal justice system, this has the same effect of pushing folks to plea bargain.

Google operates in part on its reliance on the fair use doctrines of copyright and trademark laws and has been a strong advocate of open access of copyrighted works (think Google books and Google’s indexing) and limited trademark rights (so that others can bid for Google ads on a competitors trade name). By relying on design patents, Google positions itself in a way that it can protect its rights based on patent doctrines while still arguing for weaker rights in those other areas.

Design patents remain in force for 14-years from the date of issue. Thus, Google’s design patent is set to expire on Sept 1, 2023.

I have taken a screen shot of the Google.com website from Sept 3, 2009. It pretty clearly would not infringe because of the differences between layout in the patent and the layout on the site. 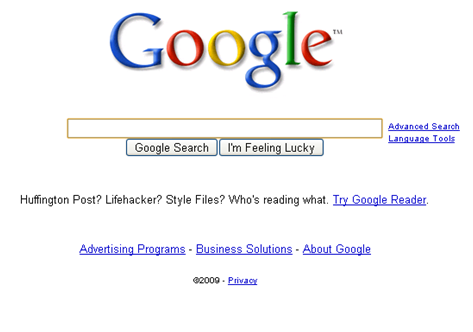 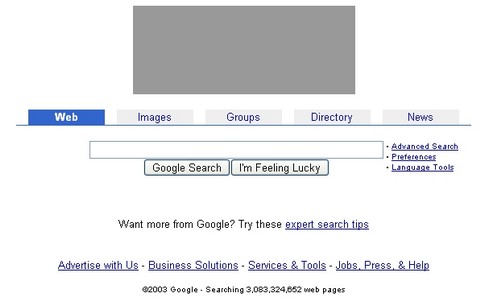 82 thoughts on “Googleâs Patent on its GOOGLE.COM Home Page”