Most utility patent applications are rejected at least once on either anticipation or obviousness.  Design patents are different.

As part of a larger project, I combed through 1049 file histories of design patents that issued in the past 12 months. Of those, 5 were rejected on novelty grounds and 8 on obviousness. This leads to a prior-art-based rejection rate of 1.2% (95% CI range of 0.7% – 2.1%).  The vast majority of the patents (81.6%) were never rejected during prosecution.  The most common rejections are under 35 USC 112 paragraphs 1 and 2.  Typically both paragraphs are asserted simultaneously.

According to the most recent USPTO annual report, design patents had an allowance rate of about 90% during the period FY2005–FY2009 as measured by the percentage of disposals that were allowances.  About half of design patents issued in 2009 were pending for less than one year. 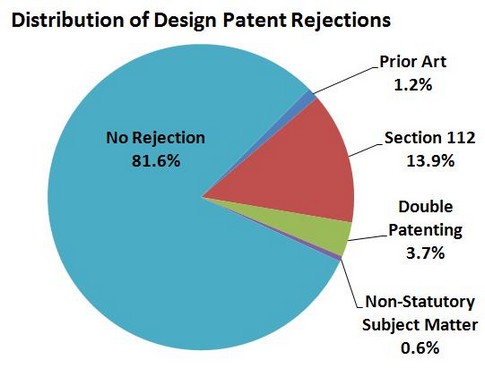