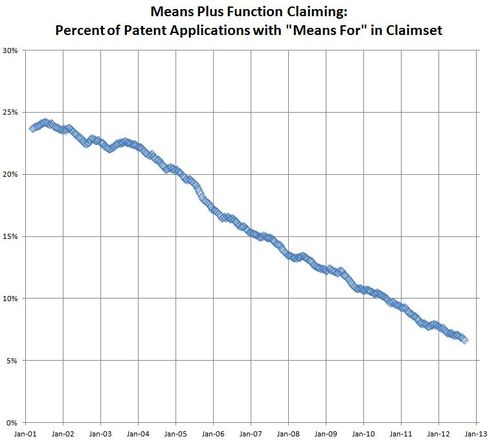 The chart above shows the percentage of published non-provisional patent applications that include the term "means for" at least once in the claimset. Although not the only way of doing so, "means for" is traditionally used by patent attorneys to invoke the doctrine known as means-plus-function claiming allowed under 35 U.S.C. 112p6. [Soon to be renumbered 35 U.S.C. 112(f)].  As the chart shows, the percentage of applications that include at least one means-plus-function term is well under 10% and seemingly in continued decline. A decade ago, about 1/4 of all applications included this type of claim.

Under the statute, a term claimed in means-plus-function format will be construed to cover the corresponding structure that is described in the specification and equivalents thereof.  Thus, for a claim recites a "means for fastening," the first step in understanding the scope of that claim is to look in the patent specification to see whether any structural component has been described.  If so, then the means-plus-function term will be construed to cover that structure and its equivalents.  Thus, in our fastenting example, if the specification discusses glue as a way to fasten two objects to gether, then the "means for fastening" will be interpreted as covering glue and its equivalents.  One reason why means-plus-function claims have fallen out of favor is that this actual scope given to the means claim is quite narrow, while a different term such as "a fastener" might be given a broader scope.  If there is no corresponding structure given in the specification, then the means-plus-function term will be considered indefinite and the associated claim invalid or unpatentable.

The idea behind means-plus-function claims is that it is often much easier and more straightforward to claim a means for doing something rather than listing (in a claim) all the possible ways of accomplishing the task.  The strong limitations on the claim scope stemming from an MPF term stems from Supreme Court cases such as O'Reilly v. Morse, 56 U.S. 62 (1853). In that case, Morse (inventor of the telegraph) attempted to claim any use of electromagnetism for sending signals over a distance. Morse made clear in his claim that he intended to not be limited "to the specific machinery or parts of machinery described in the foregoing specification and claims."  In deciding the case, the Supreme Court held that to be patentable, the legal claim must be more directly tied to the practical application and implementation of the idea. The restrictions on the interpretation of means-plus-function terms help ensure that those claims are tied to particular structures and thus will not run afoul of Morse or other similar doctrines.

Because of these restrictions on means-plus-function terms, Professor Mark Lemley has suggested that courts begin to interpret software claim terms as being written in means-plus-function format.  [Link].  In all likelihood this would severely limit the scope of many software related patents and would also lead many of them to be invalidated under MPF-indefiniteness.

55 thoughts on “Means Plus Function Claiming”