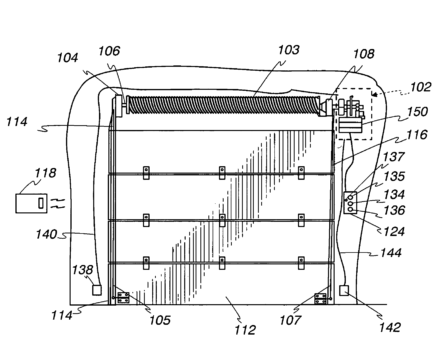 In its final written decision, the PTAB sided with the patent challenger — finding all challenged claims (18-25) anticipated by a prior Chamberlain patent, U.S. Patent No. 4,638,433 (Schindler).  On appeal, the Federal Circuit has affirmed — finding that substantial evidence supported the Board’s factual conclusion of Anticipation.

Although not express in the claims, the specification focuses the invention on setting a “max run timer” —  “the amount of time for the door to move between its open and closed limits, plus five to ten seconds.” In its decision, the Federal Circuit described the process as follows:

Claim 18 – at issue here – is not expressly limited to the “max run timer” setup, but does follow the aforementioned process with its four-step method for “assisting in the installation and maintenance” of a garage door opener (“barrier movement operator”).

The prior art patent (Schindler) focuses on a different learning mode – programming the upper and lower limits for the garage door movements.  Schindler uses the same “annunciating unit” (i.e., flashing lights) to communicate which limits are being programmed.

The appeal here focused on whether Schindler disclosed activities (plural) to be completed by the user or only one activity (singular).  The Federal Circuit confirmed that the Board had it right — Schindler discloses having the user both set an “up limit” and a “down limit.”  One issue here is that Schindler first identifies one of the activities and then later identifies the second activity.  On appeal, the Federal Circuit held that the claims do not have any timing requirement:

We agree with the Board that nothing in claim 18 “requires the activities to be identified together or at the same time.” . . . Given the absence of any timing limitation, the Board reasonably found that “Schindler’s disclosure of transmitting the signals in sequence, one after the other in response to the previously-completed steps of identifying the garage door operator’s present status and activities to be completed” teaches the “responsive to” step.

What’s going on here? Knowing Chamberlain’s history of pushing the limits of its IP protections, it looks to me like the company was using this new patent to extend of its old Schindler patent that was approaching expiration. Although Chamberlain may have something patentable here, that needed to be reflected in the claims.