In KSR, the Supreme Court indicated that the obviousness analysis should consider the “background knowledge possessed by a person having ordinary skill in the art.” KSR Int’l Co. v. Teleflex, Inc., 550 U.S. 398 (2007).   Under KSR, information deemed within PHOSITA’s general knowledge is more powerful than that found buried in a prior art reference because we assume that PHOSITA would consider using their general knowledge in combination with the prior art — even absent any express motivation to do so. Because of its potential power, the Federal Circuit has been somewhat concerned that the approach could serve as an end-run around traditional obviousness analysis.  Here though, the court found that Google had presented enough evidence to assume that the pipelining (see next paragraph) was part of the general knowledge of PHOSITA.

The invention: The claims call for downloading the “next file” in the background while playing the prior file. This setup is effectively a form of buffering (also known as pipelining or stream emulation).  The approach uses a client-side “control information file” that facilitates sequential file retrieval.  The claims have an additional feature of having a variety of media file formats, and the client device is able to “choose the format compatible with the client’s play-out capabilities.” 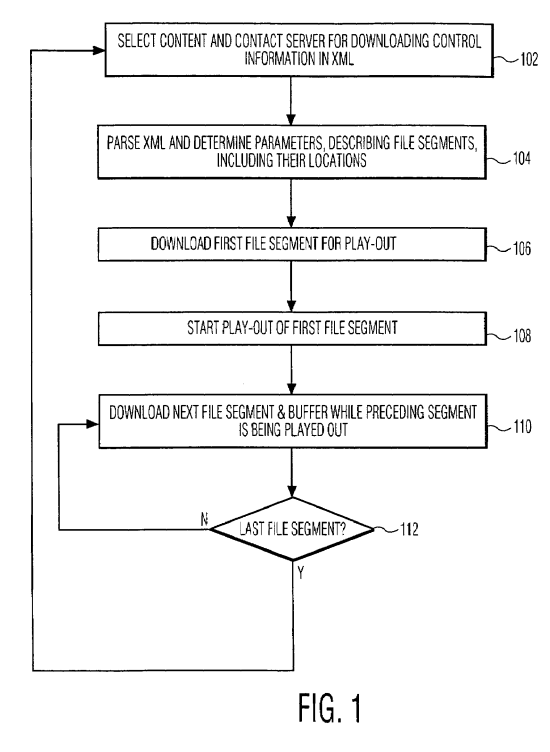 In its petition, Google alleged (1) anticipation based upon SMIL 1.0 (Synchronized Multimedia Integration Language 1.0 Specification); and (2) obviousness based upon SMIL 1.0 when combined with the general knowledge of PHOSITA.  In describing the general knowledge that “pipelining is well known”, Google cited a prior art reference (Hua) and also an expert declaration.

Extra Ground on Institution: Before getting to the obviousness issue, I’ll note an appeal/SAS issue decided by the Court.  The Board instituted the IPR on both grounds raised by Google, but also added a third ground: SMIL in view of Hua.  On appeal, the Federal Circuit found the third-ground improper — quoting the Supreme Court’s decision in SAS to the effect that the AIA does not “contemplate a petition that asks the Director to initiate whatever kind of inter partes review he might choose.” SAS Inst. Inc. v. Iancu, 138 S. Ct. 1348, 1355 (2018).  Under the statute as interpreted in SAS, the petitioner decides how to structure the IPR, and the initiation stage is a yes/no determination.  The Federal Circuit did not address the no-appealability-of-institution-decisions provision of Section 314(d).

Role of General Knowledge in IPR Obviousness: The first Obviousness-focused question that the court considered was an interesting albeit fruitless contention — that “obviousness” in IPR proceedings should be treated differently than in other areas of patent practice. In particular, the patentee noted that Section 311(b) of the AIA limits IPR considerations to only “prior art consisting of patents or printed publications.” As such, Philips argued that “general knowledge” could not be considered in the analysis.  On appeal, the Federal Circuit rejected that argument — holding that the 311(b) limits the types of prior art available in an IPR, but does not otherwise alter the obviousness analysis of Section 103.

Slip Op.  The implication here is that “general knowledge” is not “prior art” but instead part of the definition of PHOSITA under Graham.

General Knowledge: A primary case in tension with broad use of general knowledge is Arendi S.A.R.L. v. Apple Inc., 832 F.3d 1355, 1361 (Fed. Cir. 2016).  In that case, the court warned against invoking “common sense . . . to supply a limitation that was admittedly missing from the prior art” and that was not “supported by evidence and reasoned explanation.”  On appeal here, the Federal Circuit distinguished Arendi — holding that Google’s argument for general knowledge was supported by evidence and reason:

In Arendi, the Board [improperly] relied on nothing more than “conclusory statements and unspecific expert testimony” in finding that it would have been “common sense . . . to supply a limitation that was admittedly missing from the prior art.” Conversely, here the Board relied on expert evidence, which was corroborated by Hua, in concluding that pipelining was not only in the prior art, but also within the general knowledge of a skilled artisan. Moreover, Philips offered no evidence to rebut the conclusion that a skilled artisan would have known about pipelining.

Id. “Pipelining” was the only claim feature not found in the asserted prior art reference.  However, since pipelining was part of the “general knowledge,” then its use was proper to invalidate the claims.