Editor’s Note: Avery Welker is a 1L at Mizzou and likely a future patent attorney. He is starting a new series linking law school canonical cases with intellectual property counterparts. You can email ideas for future posts to avery@patentlyo.com.  – Dennis Crouch

The first line of class notes I took in Civil Procedure during our discovery module says, “Spoliation – OLD LEGAL DOCTRINE.” I’m not sure why I felt the need to emphasize that spoliation is an old doctrine at the time, but it makes sense now. Oddly, my note reflects the importance of the doctrine and how it has stood the test of time. Zubulake V, the first case in my Civil Procedure discovery module, is a perfect example of the dangers facing a party if they are not diligent about evidence preservation. Zubulake v. UBS Warburg LLC, 229 F.R.D. 422 (S.D.N.Y. 2004) (“Zubulake V”). Sanctions were the “spoils” that Skyline Steel, LLC (Skyline / Plaintiff) sought over PilePro, LLC (PilePro / Defendant) during a “bitter” patent suit between the two companies. Skyline Steel, LLC v. PilePro, LLC, 101 F.Supp 3d 394, 397 (S.D.N.Y. 2015).

Skyline and PilePro are merchants of sheet pile wall systems and components. Id. at 397-98. Sheet pile walls are structures deployed to retain soil or water and are built out of vertical interlocking sheet sections. E.g., Nucor Skyline. PilePro made accusations that Skyline was infringing PilePro’s patent, U.S. Patent No. 8,856,543, through letters and claims on their website. U.S. Patent No. 8,856,543 (filed Mar. 31, 2008) (issued Oct. 15, 2013) (‘543 Patent); Skyline, 101 F.Supp 3d at 397. In relevant part, the ‘543 Patent covers a two-step method for manufacturing a sheet pile section with an interlock connector. U.S. Patent 8,856,543. First, the preliminary wall is formed with a “material accumulation” at the side with the interlock connector, which is then shaved down by shape-cutting to produce a uniform cross-section throughout the interlock connector. Id. The method claims to be able to make different types of connectors, including a T-carrier, Hoesch claw, and a Larsson hook, through the processes shown in figures 1, 2, and 3, respectively, of the ‘543 Patent (shown below). Id. at figs. 1-3. 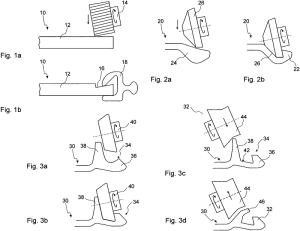 PilePro’s accusations of infringement on the ‘543 Patent have an interesting origin. To obtain the ‘543 Patent, PilePro had to differentiate their process from an earlier patent, named the “Hermes I.” Skyline, 101 F.Supp 3d at 398. The location of the material accumulation was at issue. Id. The ‘543 Patent differentiated itself (through the eyes of the USPTO) by noting that the material accumulation was only at the area to be made into the interlock, and not the entire flange, as in Hermes I. Id. Hermes I is owned by ArcelorMittal Commercial RPS, which manufactures a sheet pile system called the “HZM System,”  distributed by Skyline. Id. Soon after the ‘543 Patent was issued, PilePro sent letters to Skyline and current and potential customers of Skyline that PilePro would hold the customers liable for damages PilePro was entitled to for the use of the HZM System, which PilePro claimed may infringe on the ‘543 Patent. Id. In addition, PilePro posted a public warning on their website for about a month and a half that the HZM System was infringing on the ‘543 Patent. Id.

PilePro’s spoliation woes flowed from this website. Skyline contended that PilePro failed to produce two types of evidence related to who viewed the warning on PilePro’s website: (1) Google Analytics data and (2) sever log data collected by “PaperTrail” which are both used to track website traffic, among other analytics. Id. at 407.

Here, the court found some guidance in Zubulake V. This case, the fifth opinion in the Zubulake series, details the importance of an attorney’s duty to carefully and thoughtfully ensure everybody in a company is on the same page when it comes to file preservation in anticipation of litigation. You can feel the irritation written into the opinion about this dispute dragging out: “This is the fifth written opinion in this case, a relatively routine employment discrimination dispute in which discovery has now lasted over two years.” Id. at 424.

Laura Zubulake, an equities trader, filed a complaint against her employer, UBS Warburg, LLC (UBS), alleging gender discrimination, failure to promote, and retaliation. Id. at 425. UBS was on notice that Zubulake would file a complaint, and their counsel instructed employees to preserve any evidence that could be used through the claim. Id. However, as you may guess, the employees failed to preserve evidence on several occasions (hence Zubulake I – IV), and where they did preserve evidence, labored in presenting it timely. Id. at 436. The penalty of sanctions for UBS was sweeping, compensating Zubulake for the troubles of the missing and delayed evidence through charging UBS for costs of depositions, paying the cost of the sanctions motion, and giving the jury an adverse instruction for the irrecoverable data. Id. at 436-37.

The court in Zubulake V detailed several (non-exhaustive) steps that counsel should be taking in continually fulfilling the common law duty to preserve evidence: (1) issue and periodically reissue a “litigation hold” when litigation is anticipated; (2) communicate the importance of this hold to “key players,” who are people identified by the initial party disclosure; and (3) direct all employees to immediately turn over any active files for prompt backup and safeguarding. Id. at 433-34. Very convenient and concise for learning in Civil Procedure.

Luckily for PilePro, you don’t have to preserve evidence that never existed. PilePro’s third-party vendor deactivated Google Analytics before the warning went live on PilePro’s website, which was also before Skyline put PilePro on notice of litigation. Skyline, 101 F.Supp 3d at 408. Skyline did not produce evidence that PilePro knowingly directed their third-party vendor to shut down the analytics. Id. at 408-09. PilePro claimed to not know about the deactivation until April 2014. Id. The court concluded that PilePro was unaware of the deactivation had no duty to preserve this evidence. Id. at 409.

The failure to preserve server logs is a different story. This evidence existed but was overwritten weekly, apparently a part of their data policy. Id. The court concluded that when PilePro was put on notice, shortly after posting the message on their website, they had a duty to preserve those logs. Id. The court also found that PilePro acted with a culpable state of mind, defined as at least negligent conduct because counsel for PilePro did not continually ensure the preservation of evidence and communicate this to key players, which allows for a spoliation inference. Id. at 410-11.

The court then needed to determine appropriate sanctions. Because PilePro was merely negligent and did not willfully engage in spoliation, the court did not impose an adverse jury instruction on the missing logs but chose to prevent PilePro from using this lack of evidence against Skyline. Id. at 412. Additionally, PilePro was instructed to reimburse Skyline for the costs associated in moving for sanctions. Id. Skyline won the big prize as well: summary judgment on Skyline’s noninfringement claim was granted. Id. at 403.

The Zubulake V court expressed the duty and dangers of spoliation simply:

At the end of the day, however, the duty to preserve and produce documents rests on the party. Once that duty is made clear to a party, either by court order or by instructions from counsel, that party is on notice of its obligations and acts at its own peril.

Discovery is one of the unique cornerstones of American legal practice, and spoliation helps protect the integrity of the discovery process.

3 thoughts on “Law School Canons: The Spoils of Discovery”