The court has denied DMF’s mandamus petition on an interesting post-IPR estoppel question.

DMF sued ELCO Lighting in 2018 for infringing DMF’s U.S. Patent No. 9,964,266.  As is usual these days, ELCO turned-around and filed an inter partes review petition — challenging the patent’s validity based upon a 2011 product catalog (printed publication) that had featured the Hatteras lighting product.  Although the PTAB instituted the IPR, it eventually sided with the patentee in holding that the prior printed publication wasn’t enough render the invention obvious. 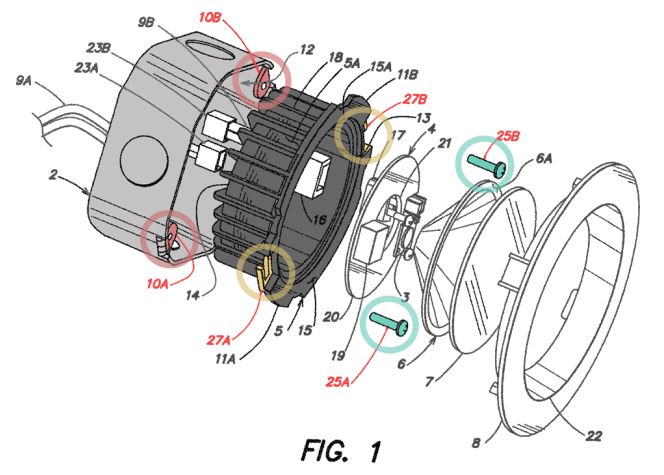 Back in the district court, ELCO is seeking again to invalidate the claims based upon the Hattaras lighting product.  The difference now is that they are not simply raising the defense based upon the printed publication but rather are presenting the actual product as prior art based upon it being “in public use, on sale, or otherwise available to the public.”  35 U.S.C. 102.

Section 315(e)(2) estops an IPR petitioner from later asserting in litigation that a “claim is invalid on any ground that the petitioner raised or reasonably could have raised during that inter partes review.”  IPRs are limited only to arguments based upon patent documents and printed publications — and so the actual prior product could not have been used as the basis for the IPR.  The district court went a bit further and found that there must be “a substantive difference” between the publication and the physical product that is “germane to the invalidity dispute.”

Here, the district court found substantive, germane differences.  In particular, the failing of the prior art reference was that the elements of the invention required cobbling together images from different products in the catalog.  The PTAB found that mix-and-match approach improper.  In the district court litigation, ELCO is seeking to use the single product to show each element.

On Mandamus, the Federal Circuit did not delve into whether the substantive-germane legal standard was correct or whether the facts had been properly decided — but did find them not “clearly and indisputably erroneous.”  Further, the court found that mandamus was not necessary — the patentee should wait until final judgment and appeal. “DMF has not shown that a post-judgment appeal is an inadequate remedy for asserting a statutory estoppel argument.”

10 thoughts on “Post-IPR Estoppel: Printed Publication vs. Actual Product Shown in the Publication”