The chart below shows the number of Supreme Court patent decisions broken-up by decade. The ramp-up in the late 1800s is tied to the “second industrial revolution” in the US.  The drop in cases after 1890 is largely procedural. Congress created the regional circuit courts of appeals as a buffer between the trial courts & Supreme  Court.  Subsequently, the Court limited the number of patent cases it heard via the certiorari process.  Read more about this transition in my Kessler Cat paper (with Homayoon Rafatijo).

We are 2 years into the 2020s and have 5 decisions thus far (counting Google v. Oracle, which discusses substantive patent issues).  If that trend continues, then the  final figures for the 2020s would be similar to that of the 2010s.  Of course, thus far in the 2021-22 term, the Supreme Court has not yet granted certiorari in any patent cases. 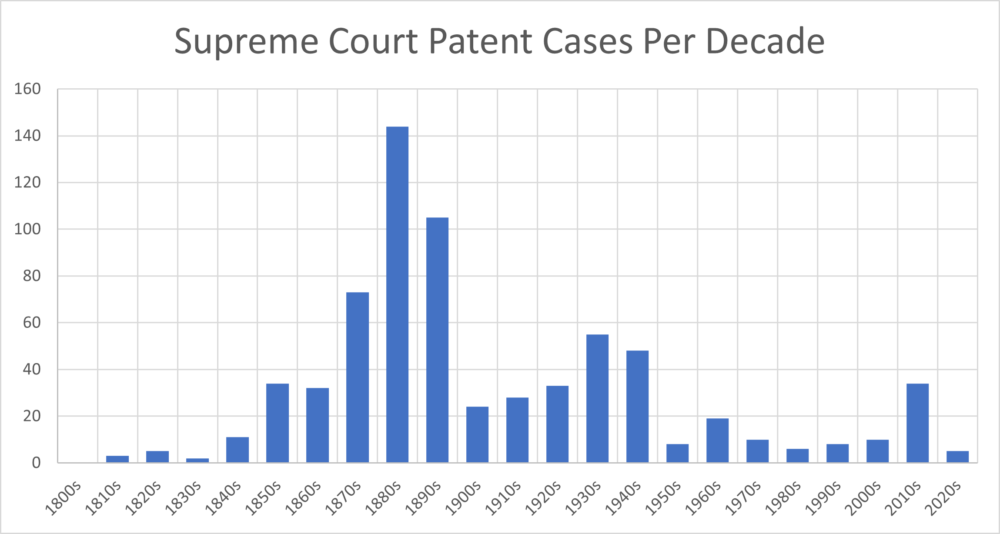 To get this data, I used Westlaw’s case search and limited the results to Supreme Court decisions identified as “patent” decisions by Westlaw and that have a patent law related WL KeyCite headnote.  Reasonable minds will differ on what counts as a “patent case.”