One quirk of the Patent Act is Section 271(e), which creates infringement liability for simply seeking FDA approval to market a generic version of an already approved drug. 35 USC 271(e).  Here, Actavis filed an Abbreviated New Drug Application (ANDA) seeking FDA approval to market a “liquid methylphenidate (MPH) oral suspension.”  This is the same drug found in Ritalin and used to treat ADHD and other neurological concerns.  This particular formulation is in liquid form and the active ingredient is designed for slow release. (Tris sells under the brand “Quillivant XR”).  Tris responded to the Actavis ANDA by suing under 271(e) and asserting three separate patents.

271(e) actions are seen as a form of declaratory action similar to those taken by courts of equity prior to the merger of law and equity.  As such, there is no Constitutional right to a jury trial in these cases and instead all issues of fact and law are typically determined by a federal district court judge.

The usual jury verdict just requires the ticking of an [X] invalidity box. Likewise, the Federal Circuit regularly decides its cases with by ticking the [X] affirmed without opinion box.  The trick with bench trials though, is that the judge is required to explain its factual and legal conclusions.  Fed. R. Civ. Pro. 52(a).

In an action tried on the facts without a jury or with an advisory jury, the court must find the facts specially and state its conclusions of law separately.

Id.  Here, Judge Connolly (D.Del.) held a bench trial and original sided with the generic manufacturer–finding the asserted claims obvious.  That original decision though was vacated by the Federal Circuit back in 2018 (the also panel slightly amended its decision in a 2019 rehearing order). In its decision, the Federal Circuit found that the district court had failed to explicitly and specifically consider a number of factual disputes and thus remanded for further findings:

On remand, the district court accepted further briefing on the merits and then flipped the outcome–this time siding with the patentee.  In particular, the district court held that “Actavis failed to prove by clear and convincing evidence that a person of ordinary skill in the art would have been motivated to combine the prior art references with a reasonable expectation of success.”  On appeal here, the Federal Circuit has affirmed.

wherein said suspension provides a single mean average plasma concentration peak and a therapeutically effective plasma profile for about 12 hours for methylphenidate, and

following a single oral administration of said suspension at a dose equivalent to 60 mg racemic methylphenidate HCl in adults.

By the time Tris filed its patent application, several other methylphenidate oral formulations & extended release versions were already on the market, including Concerta, Daytrana, Focalin XR, Metadate CD, and Ritalin LA. As with most obviousness cases, the prior art taught all the claim limitations in various subsets, but no single reference disclosed an embodiment with all the limitations.  And, the Federal Circuit agreed with the district court that the patent challenger had failed to show that PHOSITA would have a reasonable expectation of success when attempting to make any of the proffered combinations.

Without delving into the merits here, I only want to note the court’s focus on motivation-to-combine that is now regularly coupled with the requirement that the combination be based upon a “reasonable expectation of success.”   The Federal Circuit (as well as lower courts and the USPTO) have increasingly used the “reasonable expectation of success” as a prong in the obviousness analysis.   The chart below shows the number of Precedential Federal Circuit decisions that discuss a the Reasonable Expectation of Success test as part in the context of an Obviousness determination. As you can see, there was a substantial rise in its use beginning in 2006 during the lead-up to KSR (2007). 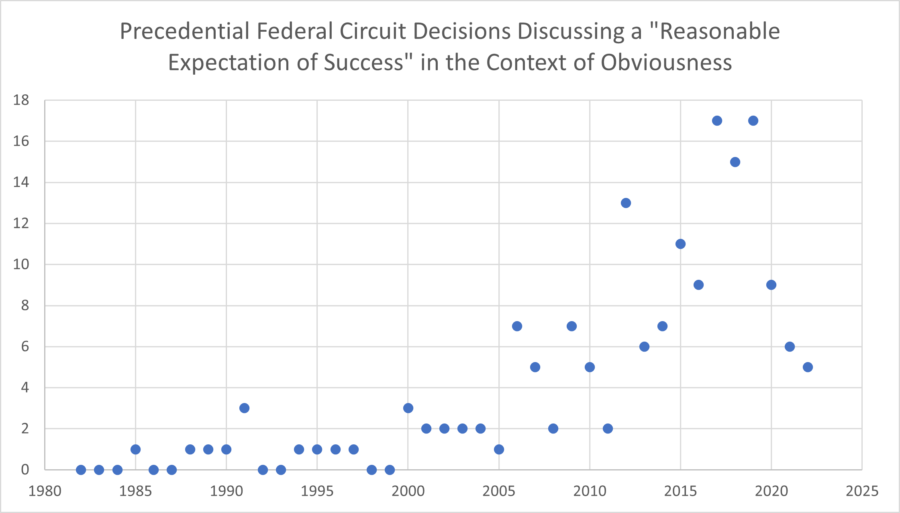 I’ll note also that this appears to be a case where forcing the tribunal to fully explain its decision ended up shifting the ultimate result.