Zahner’s Design Pat. D746,078 covers the ornamental design of a shower curtain as shown in the figures above.  Zahner sued Katri Sales for infringement, and the defendant turned-around and filed a request for ex parte reexamination. The examiner found some great prior art from 2013, which predates this particular design application filing date. But, the design patent also claimed priority to Zahner’s prior utility patent application (Serial No. 09/617,402) that predates the reference. The utility application includes a number of drawings that are similar-to, but not exactly the same as those in the Design Patent. (Images below).

The basic question in the case then was whether the priority drawings provide sufficient written description support for the eventual design as claimed.

The PTAB found the design claim was not sufficiently supported by the priority disclosure and so the priority claim was invalid.  And, without the priority claim, the invention had become obvious by the time of the later actual filing date. The basic problem, can be seen in the design patent’s perspective view shown below.   The perspective shows that the inner surface of the aperture is flat and with right-angled edges.  According to the PTAB, those features are new to the design patent and not disclosed by Figure 21 of the priority filing.  On appeal, the Federal Circuit affirmed without opinion. 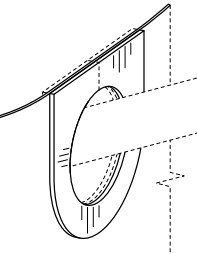 Close-up of the Design Patent drawing

Zahner disagrees with the merits of the decision here, but has also suggested that it will raise procedural challenges in an upcoming petition for writ of certiorari.  In particular, Zahner intents to raise the same question that Arthrex will likely raise, although this time in the reexamination context:

Question: Does the Reexamination Statute permit a challenge to priority claims?

Zahner has also argued that its situation is particularly egregious because the priority question was particularly addressed by the examiner during the original prosecution.  That is important because reexaminations are limited to “new” questions of patentability.

After receiving the R.36 no-opinion affirmance, Zahner filed a petition for panel rehearing that included the following line: “A written opinion on this issue is respectfully requested.”  The Federal Circuit though denied the petition without opinion.   This situation thus raises the issue I addressed in my 2017 paper titled Wrongly Affirmed without Opinion. In that paper, I argue that these no-opinion judgments are contrary to the statutory requirement of Section 144 requiring the court to issue an opinion in appeals from the PTO. Although this argument has been raised in dozens of cases, the court has not yet responded to the argument, and the peculiar procedural setup allows this status quo.  In a recent request for extension of time, Zahner indicated to the Supreme Court that it also plans to raise the no-opinion question.

I mentioned Arthrex above, its petition to the Supreme Court will be due in November 2022.  In its failed petition for rehearing on the IPR-priority issue, Arthrex asked the following question:

Whether 35 U.S.C. § 311(b)’s restriction “only on a ground that could be raised under section 102 or 103” permits IPR challenges that depend solely on compliance with the written description requirement of section 112.